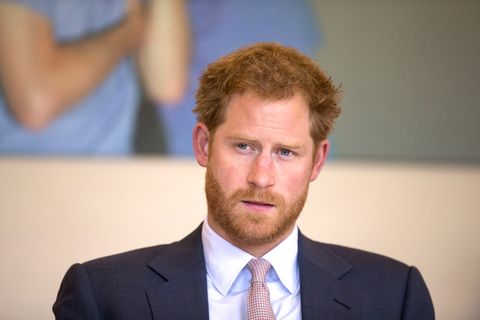 When Prince Harry and Meghan Markle walk down the aisle on May 19, most eyes will be on the bride and the long-awaited reveal of her wedding gown. But those of us who have adored Harry since his youth are also dying to see what the groom wears for his big day. Since the prince spent 10 years serving in the military, it's likely he'll wear one of his dress uniforms, like his Household Cavalry garb.

Simple enough, right? Wrong. According to Royal historian Hugo Vickers, the army doesn't approve of facial hair and Harry would be required to shave his now-signature scruff if he wants to wear the uniform on his wedding day.

Prince Harry has rarely been seen without a beard since he left the military in 2015, and dare we say it's part of his sex appeal? How could he not wear that ruddy scruff on the most important day of his life?!

The naked face in question, seen here in 2015.
Getty Images

Thankfully, being royal (and no longer on active duty) means you get a little flexibility with the rules—Harry has worn a military dress coat in public with a beard before. Here he is at the Armistice Day Service in 2016, wearing both beard and uniform, for example:

"He does it sometimes but they don't like it," Vickers said, acknowledging that Harry has broken this rule in the past. "That's why when he took the parade at Sandhurst, he wore a suit."

Not all royal experts agree that Harry will even want to wear his military uniform, however. Some think he'll forgo the uniform all together to keep the occasion more low-key.

"My hunch is Harry will wear morning dress because it is going to be relatively low-key, compared with his brother's wedding, and he is no longer a serving officer," Royal correspondent Penny Junor told Elle UK. "If he wore uniform it would make the whole thing much more formal and he is essentially a very informal sort of guy."

Whatever he wears, Harry is sure to look dapper.

Related Story
Wax Prince Harry Is So Hot He Could Melt Himself
Kayleigh Roberts Contributor Kayleigh Roberts is the weekend editor at Marie Claire, covering celebrity and entertainment news, from actual royals like Kate Middleton and Meghan Markle to Hollywood royalty, like Katie Holmes and Chrissy Teigen.
This content is created and maintained by a third party, and imported onto this page to help users provide their email addresses. You may be able to find more information about this and similar content at piano.io
Advertisement - Continue Reading Below
More From The Ultimate Guide to the Royal Family
Are Will & Kate Sending a Message to Harry & Meg?
Harry and Meghan Reportedly Have a Four-Book Deal
Advertisement - Continue Reading Below
Rare Photos From Diana and Charles' Wedding
Prince George Looks So Grown-Up in New Portrait
Whatever Happened to Archewell Audio?
Prince Harry Is Set to Publish a Memoir
For Prince George Turning 8 Is a Fashion Milestone
Queen & Philip Made a Pact Not to Mourn Too Long
Diana Was Traumatized by Something Charles Said
Charlotte Will Miss George at Boarding School