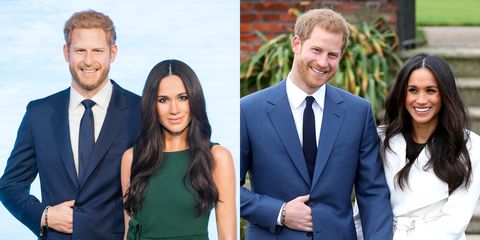 You know you've made it in the world when someone decides to sculpt your entire human self out of a giant slab of wax. Well, Prince Harry and Meghan Markle can officially say they've made it!

Today, Madame Tussauds London revealed the royal couple's waxworks, and can I just say, damnnnn Prince Harry [insert heart eyes, here]!!! Is it wrong to be so attracted to a wax figure? But, actually, vote and tell me your honest thoughts, because I need to know.

Harry already had a wax figure, which was unveiled on his 30th birthday.

But this version has been updated to include that scruffy, red beard of his, a well-tailored suit, and that weird thing he always does with his hand. Wax Harry is so hot, he could melt himself (sorry, not sorry)!

Meanwhile, does anyone else feel like Meghan's wax figure is staring directly into their soul? No, just me? *Crickets...*

The waxworks will be available for public photos ops on May 18 in London—just one day before the royal wedding. And good news for those of us across the pond: Wax Harry and Meghan will be in the United States, too, in a Times Square exhibit.

So, I guess I'll be traveling to Times Square to get my pic with hottie Prince Harry and gorgeous Meghan, since I still haven't received my invite to the royal wedding.