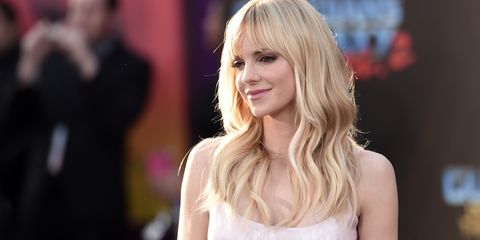 Everyone breathe easy: Anna Faris is just as wonderful as you think she is. In fact, when I got on the phone last week to chat with her about her co-starring role in the reboot of Overboard, she apologized every few minutes for being mildly distracted as she was slathered with “some goop” and had her eyebrows drawn on for an appearance on The Joel McHale Show (our call was lumped into the few minutes she had to be in the makeup chair). “I'm about to play a ridiculous character,” she says gleefully, “so I'm excited about that.”

For context, this is a woman who is currently doing a promotional tour across North America, while continuing to star in one of the highest rated sitcoms on TV (Mom), who published a book last year, has her own successful podcast, and has had to publicly navigate a divorce from ex-husband Chris Pratt, while co-parenting their 5-year-old son, Jack. And yet, she’s apologizing to me as I conduct this interview from my couch. That alone tells you how generous and thoughtful Faris is.

Her easy-going nature is something her Overboard co-star Eugenio Derbez noticed right away. “She’s really funny, she’s really humble, down-to-earth, and grounded. She’s really…she’s one of the nicest co-stars I’ve worked with,” he tells me.

Faris and Derbez in Overboard.
Lionsgate

Stepping into her role for the film was, “terrifying,” Faris says. The ‘80s original ignited Goldie Hawn and Kurt Russell’s relationship, and the beloved Hollywood couple invited Faris to dinner to discuss the movie before filming. Ultimately they gave her their blessing, but Faris says she still felt like, “how could we do this movie that I love so much justice in any way? But, then I also felt like I wouldn't want anyone else to be a part of it. I had these kind of complicated feelings about the project, but really, I was very honored.”

To stand apart from its predecessor, the 2018 version (which hit theaters last week) gives the story a gender flip: Derbez plays Hawn’s role of spoiled millionaire with amnesia, while Faris’ character, Kate, is similar to Russell’s—a widowed, single mother trying to finish nursing school as she works odd jobs to provide for her three daughters. Kate isn’t the first single mother Faris has played. Many TV fans know her as ‘Christy,’ a single mother of two working to maintain her sobriety while living with her not-always-supportive mother (Alison Janney) on the CBS comedy Mom.

My characters are really proud. It's not a search for a man.

Now a single mother herself, Faris loves that “both of my characters—Christy in Mom and Kate in Overboard—are really proud. It's not a search for a man. It's sort of like, This is a game of survival and how do I provide food for my kids? Roof over their heads? And also make sure that I'm not compromising them. I like the idea that, even though I play desperate, broken women, that there's still a lot of pride behind who they are, and they wouldn't want their kids to see a weaker version of themselves.”

But how does Faris stay strong when her personal life makes headlines almost every day? The day before our interview, Pratt was all over the news after saying, “Divorce sucks.” When I ask Faris about that comment, she simply says, “It feels like it's more dramatic than it is. Chris and I have a great friendship and Jack is so happy and so loved.”

Faris, Pratt, and their son Jack, in April 2017.
Getty Images

She deals with those headlines in the easiest way possible—she doesn’t read them. “I think that I just sort of learned to not Google myself,” she says, “and when my sweet assistant is like, ‘Look what just popped up.’ I'm like, ‘Fuck off. I love you but I don't know if I need to know everything.’”

In response to Pratt saying, “Divorce sucks,” Faris says, “It feels like it's more dramatic than it is.”

Lately, Faris has been trying to get out in front of what might pop up about her on Google. “One of the reasons I started my podcast [‘Anna Faris Is Unqualified’] was because it felt like I had been fighting being a public person for a long time,” she tells me. “I didn't understand its purpose. I didn't understand why I had to do it. Then it felt like, This is an interesting way for me to get to talk to strangers about problems that we all have outside of the context of celebrity. And also to be able to control a sense of my narrative, because I was feeling like I have no control over this. I think a lot of actors would describe themselves as more introverted than most people would think, because there is that feeling like, you get to hide behind a character. Then, when you do press, you suddenly feel exposed and you have to analyze yourself in a public forum, which is incredibly uncomfortable.”

I mention that in past interviews she’s professed that she’s a romantic, and ask her if that’s still the case. She takes a breath, and replies, “I do think I'm a romantic because I love the small things in life. Just like the little pleasures of life that feel like secrets. I still always want to keep that as a part of my life, does that make any sense at all? Maybe. I don't know.”