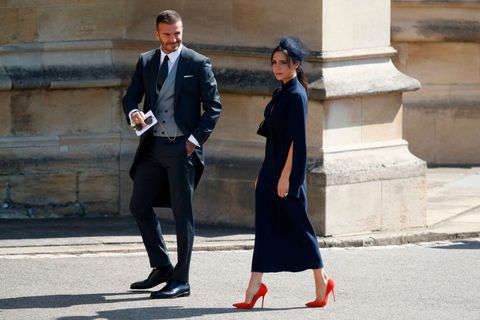 Victoria and David Beckham are at the royal wedding of Prince Harry and Meghan Markle, and oh, did you know? They look incredible.

She also wore navy to Prince William and Kate Middleton's wedding in 2011.

Her hair was pulled into a low and sleek pony, and yes she was wearing a fascinator although as fascinators go it was relatively low-key.

She finished the look with a pair of red pumps.

Her husband was wearing a sharp three piece gray suit. His vest was a lighter shade of slate while his jacket and pants were a deep graphite. He's also wearing a pocket watch, naturally.

Markle is not only close friends with Beckham, but also a fan of the designer's work. She wore a Victoria Beckham sweater in her engagement photos.

Earlier this year, it was rumored that the Spice Girls would be performing at the wedding. Other members of the group have not been spotted just yet, so for the moment...that's still a rumor.

Hannah Morrill Contributor Hannah Morrill is a writer and editor based in Portland, Maine.
This content is created and maintained by a third party, and imported onto this page to help users provide their email addresses. You may be able to find more information about this and similar content at piano.io
Advertisement - Continue Reading Below
More From Meghan Markle and Prince Harry's Royal Wedding
Meghan Markle Broke Tradition With Wedding Speech
I Tested Meghan Markle's Top Beauty Products
Advertisement - Continue Reading Below
Relive Harry and Meghan's Spectacular Wedding Day
Archie's Birth Certificate Reveals New Royal Tea
Meghan and Harry's Wedding Photographer Details
Meghan Markle Curated the Royal Wedding Playlist
Harry and Meghan Act as Museum Tour Guides
An Obsessive Timeline of Harry and Meghan
Harry and Meghan Took One Risk With Their Wedding
Meghan Markle's Hidden Wedding Tribute to Harry