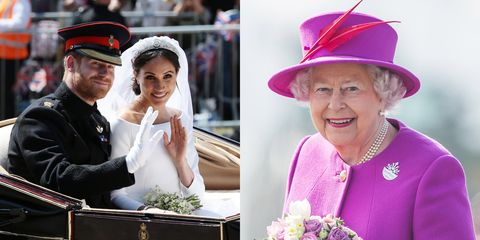 Meghan Markle and Prince Harry have officially asked that their friends and supporters donate to charity in lieu of sending them traditional wedding gifts. When you're the Queen, of course, the rules don't apply to you, so Harry's grandma gave the couple a very tangible, very extravagant gift: A house.

Queen Elizabeth reportedly gave the newlyweds York Cottage, from her Sandringham Estate, according to Metro. Per Harper's Bazaar: "The overall property is 8,000 hectares large (around 19,800 acres), including a 240-hectare public park and 24-hectare garden, which is connected to the main house."

Royal biographer Duncan Larcombe told Cosmopolitan UK that the Queen "has a habit of giving property" to family. She gave Sunninghill Park to Prince Andrew, Birkhall to Prince Charles, and Anmer Hall to Prince William and Kate Middleton.

"So there's every chance that Harry and Meghan might find themselves the proud owners of a nice property outside of London," Larcombe said.

According to Metro, York Cottage used to be known as the Bachelor’s Cottage—something that will certainly change if one of the most famous married couples in the world decide to move in.

The cottage is currently used as accommodation for guests visiting Sandringham on holiday accommodation and for some of the estate's staff.

Will and Kate spent George's early years in their Sandringham home, Anmer Hall, and it's possible Harry and Meghan will do the same if they have children. For now, Harry and Meghan live in Nottingham Cottage on the grounds of Kensington Palace in London.

Kayleigh Roberts Contributor Kayleigh Roberts is the weekend editor at Marie Claire, covering celebrity and entertainment news, from actual royals like Kate Middleton and Meghan Markle to Hollywood royalty, like Katie Holmes and Chrissy Teigen.
This content is created and maintained by a third party, and imported onto this page to help users provide their email addresses. You may be able to find more information about this and similar content at piano.io
Advertisement - Continue Reading Below
More From The Ultimate Guide to the Royal Family
Rob Lowe: Prince Harry Is Rocking a Ponytail Now
A Look Back at Princess Anne's Life in Photos
Advertisement - Continue Reading Below
A Look at Royal Family Portraits Through the Years
Diana's Ex Is Blasting Her Infamous BBC Interview
Meghan Markle Can No Longer Be a U.K. Citizen
Harry & Meghan Quit Social Media Because of Trolls
Harry Has Been Thriving Since the Royal Exit, TYVM
A Royal Staffer Stole from the Palace & Sold Items
The Royal Family Marks Kate Middleton's Birthday
Harry & Meghan Probably Won't Return to Royal Life