Today's Top Stories
1
And Now, a Word From the Future Voters of Iowa
2
Read 'Followers' With Us in February
3
Spring Dresses to Beat the Winter Blues
4
Found: The Best Night Cream for Your Skin Type
5
Blake Lively Made a Glam Return to the Red Carpet
Getty Images

After spending over two decades in jail for a first-time, nonviolent drug offence, Alice Marie Johnson was recently pardoned from her life sentence by President Trump. On Wednesday, Kim Kardashian, who persistently led the campaign for her freedom, celebrated the good news by meeting Alice in person for the first time.

And first on the to-do list in this new life without bars? Teaching her the basics of Snapchat because y’know, priorities.

Two weeks after Johnson’s sentence was brought to an end, Kim headed to Memphis to come face to face with the 63-year-old grandmother, and prove that nothing says justice quite like the bunny filter.

Sharing the poignant moment on social media, Kim told her Snapchat followers: “Alice has never used filters before, so I’m showing her the ropes. Love you, Alice!”

As well as imparting the wisdom of being adorable on social media at all times, Kim also sat down alongside Alice and The Today Show’s Hoda Kotb for an interview set to be shown later um, today.

The reality star told the host: “I love this woman. I mean, I already knew just by talking to you on the phone and just seeing you in videos, but I mean you are everything and more than I ever thought.”

More importantly, however, it turns out the heart filter is Kim’s overall favorite. Good to know. 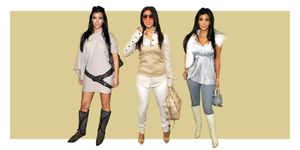