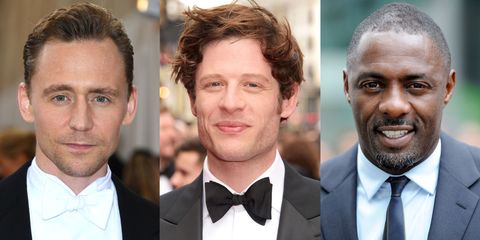 Many men (and women, thank you very much) have dreamed of uttering the iconic line "the names Bond, James Bond," but only the lucky few can call themselves 007. And while Daniel Craig is captaining the Bond ship at the moment, he seems ready to move on. At least that's what was implied in 2015 when he told Time Out: 1) "I'd rather break this glass and slash my wrists" and 2) "We're done. All I want to do is move on."

So, what we're getting here is, as much as Daniel Craig totally loves playing James Bond, he's ready to give up the mantle. Though it should be noted that his attitude toward whoever replaces him is literally, "I don't give a f*ck." We, however, give all the f*cks, and have gathered up the men (and one woman) who are volunteering as tribute. May the odds be ever in their favor.

Anyone who's watched Idris Elba in Luther knows what a fabulous actor he is, and it's clear that he has major Bond vibes. The question? Is Hollywood willing to take a stand against systemic racism and cast a blank Bond? Answer: Hopefully, because Idris would kill it—though he's sick of all the hype. "It feels like I'm campaigning, and I'm not," he said. "At first it was harmless—oh, I know, wouldn't it be great? And now it's started off racial debates. I'm probably the most famous Bond actor in the world, and I've not even played the role. Enough is enough. I can't talk about it any more."

Thanks to a very Bond-esque roll in The Night Manager, Tom Hiddleston seems like a shoo-in for 007. Some argue that his air of mystery has dimmed now that he's dating Taylor Swift, but those people are incorrect. Also, it should be noted that both Tom Hiddleston and James Bond went to Eaton, and Tom was seen meeting with Bond producers at Soho House. That aside, the British actor seems pretty meh on the subject. "I don't think that announcement is coming," Hiddleston recently said. "I am very gratified to hear the enthusiasm. Your guess is as good as mine, to be honest."

James Norton hasn't made the leap into American superstardom yet, but go ahead and watch Happy Valley on Netflix and you'll see why he's been pegged as a potential James Bond. He's hard to read, and gives off troubled vibes like it's his job. (Which, to be fair, it is.) He's also on board with male objectification, so playing Bond should be a breeze. "It's been so long, hasn't it, that women have found themselves in that position?" Norton told The Telegraph. "And so now, it feels right that it is happening the other way round."

Remember Billy Elliot? He wanted to be a dancer, guys. But then he grew up to be a candidate for James Bond, so whatever. Bell is a pretty young candidate for 007 at just 30, but his acting in Snowpiercer makes it clear why he's in the running. In fact, James Bond producer Barbara Broccoli (best last name ever) entered discussions with Bell after working with him on Film Stars Don't Die.

Never heard of Aidan Turner? It's cool, we got you. Despite not being a household name in the states, Turner has been lauded for his performance in BBC's series Poldark, and put on a distinctly Bond-y display in Agatha Christie's And Then There Were None. There's been some concern regarding Poldark's filming schedule, but breath deep: if the Bond Powers That Be want Turner, they'll undoubtedly work around his schedule.

Chances of being Bond:🍸🍸🍸

Given the fact that he carried Mad Max: Fury Road with the sheer power of brooding, the internet is correct in thinking Tom Hardy would make a great Bond. However, Hardy is a serious character actor who's been nominated for an Academy Award. Will he realistically want to pull a Daniel Craig and typecast himself during such an A+ point in his career?

Chances of being Bond:🍸🍸

Guys, Damien Lewis really wants to play James Bond, bless his heart. And while, yes, he was excellent in Homeland, it looks like Mrs. Broccoli and her friends aren't here for it."I've sent them postcards from exotic locations," Lewis joked earlier this year. "I've sent selfless of my abs from the gym. I've done everything I can to get the job, and nothing." Sending our thoughts and prayers.

Chances of being Bond: 🍸

That one lonely martini glass makes us sad, too, but while the internet seems to love the idea of Gillian as Bond, she likely won't even be considered due to this ongoing problem called sexism. Then again:

Mehera Bonner Contributor Mehera Bonner is a news writer who focuses on celebrities and royals.
This content is created and maintained by a third party, and imported onto this page to help users provide their email addresses. You may be able to find more information about this and similar content at piano.io
Advertisement - Continue Reading Below
More From Celebrity
Kate, George, and Charlotte Were Seen Shopping
J.Lo Shares First IG Photo Post A-Rod Split
Advertisement - Continue Reading Below
Harry Has Experienced "Frostiness" from Royals
Billie Eilish Just Debuted a Bouncy Blonde Blowout
Gigi Shared an Adorable Spring Selfie With Khai
Katie Holmes Posted a 15th Bday Tribute to Suri
Chrissy Teigen Talked Stigma Around Infertility
Beyoncé Stuns in a Mesh Dress With Matching Gloves
Lizzo and Chris Evans Had the Best IG Interaction
Travis Shared PDA-Heavy Bday Tribute to Kourtney