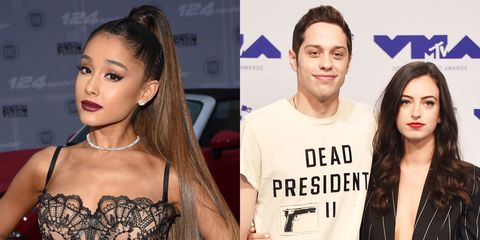 Ariana Grande and Pete Davidson have only been dating for about a month, but they're moving at lightning speed. Now, sources close to the couple say that, while Davidson was technically single when he started seeing the "No Tears Left to Cry" singer, he may have pulled a classic Ross Geller move.

According to TMZ, Davidson and his ex-girlfriend, writer and actress Cazzie David, were "on a break" in early May when he moved on with Grande. The TMZ source says the couple weren't necessarily over for good (although, now, it seems like they probably are).

Davidson and Grande got engaged after just a few weeks of dating, with Davidson seeming to confirm the news with a picture of Grande's ring on Instagram.

"[You] know what you’d dream it be like? [It’s] better than that," he captioned the photo.

Today, Grande hinted that the couple had taken yet another huge step and moved in together. In a post on her Instagram Story, Grande wrote, "Us in our new apartment with no furniture 1 speaker and red vines."

Earlier this month, Davidson made a very permanent declaration of his love for Grande with two tattoos in tribute to the singer. He got her signature Dangerous Woman bunny mask tattooed behind his ear and her initials, AG, inked on his thumb.

The couple haven't been shy about their love. Earlier this month, Grande posted a PDA-filled picture with the caption, "I am but a Pete Davidson update acc stay tuned for more (pete follows / comments sumtimes)."

And, basically, that's true. For both of them.