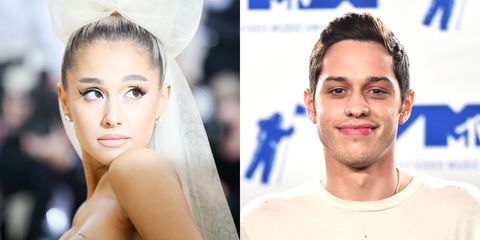 Guys, there's been a development in the anxiety-inducing drama that is Pete Davidson and Ariana Grande's relationship, because of course there has. Try to keep up: Late this afternoon, Davidson took to Instagram to sorta, maybe confirm the duo's reported engagement:

The caption is in the couple's typical cryptic fashion ("u know what you’d dream it be like ? it’s better than that,"...), but fans have called out a pretty damming piece of evidence in the photo.

Look closely and you'll notice Grande's ring finger—which rests over Davidson's tattooed hand—houses the gigantic diamond that the internet has called attention to this week.

To recap: After news of the three-week-long couple's engagement broke, fans went full-stalker mode and discovered that Grande has been sporting (what seems to be) a massive engagement ring. Here's a pic of Grande performing at Wango Tango on June 2 (nine days prior to People breaking the news):

Welp, here's hoping that this is Davidson's version of confirming the engagement—whether it's subtle or not. And Ariana, if you're reading this, please tell me what exactly is going on in your love life so I can finally rest easy.

I have yet to do a load of laundry during Ariana Grande and Pete Davidson's relationship.

Related Story
Are Ariana Grande and Pete Davidson Engaged?
Ruby Buddemeyer Beauty Editor Ruby is the beauty editor at Cosmopolitan, where she covers beauty across print and digital.
Advertisement - Continue Reading Below
More From Celebrity
47 Really and Truly Adorable Celebrity PDA Moments
Dakota Johnson Rocks Gucci Suit in Milan
Advertisement - Continue Reading Below
The Cast & Director of 'Cruel Intentions' Reunite
Prince Harry Spotted on a Grocery Run in Canada
Kanye West Leaves Kim Kardashian in an Elevator
Channing Tatum Is "Happy" for Jenna Dewan
Inside Chrissy Teigen and John Legend’s Home
A Look at Royal Family Portraits Through the Years
Are The Weeknd's 'After Hours' Lyrics About Bella?
Kendall and Harry Had a Moment At the Brit Awards