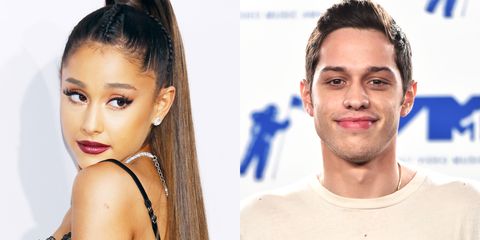 Ariana Grande and Pete Davidson are legit in love, according to Davidson's tattoo artist, Jon Mesa, co-owner of No Idols tattoo shop in New York City.

In May, Mesa says Davidson came in to have a tattoo of his ex-girlfriend, Cazzie David, covered up, prompting Mesa to dole out some advice.

"So I did a huge coverup [adding a forest of trees]...After we were done, I told Pete, 'Hey, dude, let’s just stop with the girlfriend tats until after [Grande’s] your wife,'" Mesa told Page Six. "Because relationships come and go, and Pete is a really young man. [But] I think that went in one ear and out the other."

On the one hand, Davidson did not wait until he was married to Grande to get some ink in her honor (earlier this month, he got her initials tattooed on his thumb and her iconic Dangerous Woman bunny mask inked behind his ear). On the other, he didn't wait long after getting those tattoos to pop the question, so many he took some of Mesa's advice to heart?

Davidson went to Los Angeles-based tattoo artist London Reese for his first two Ariana-themed tattoos, but he returned to Mesa for a third after that—he wanted the word "Reborn," to symbolize how much his life has changed since meeting Grande. In addition to adding to Davidson's collection of ink, Mesa got the chance to see the SNL star and the singer together because she accompanied him for the tat.

So what are Pete Davidson and Ariana Grande like as a couple?

"They are just riding that magical wave of bliss together," he said. "It’s obvious that Pete is super in love with Ariana."

Kayleigh Roberts Contributor Kayleigh Roberts is the weekend editor at Marie Claire, covering celebrity and entertainment news, from actual royals like Kate Middleton and Meghan Markle to Hollywood royalty, like Katie Holmes and Chrissy Teigen.
This content is created and maintained by a third party, and imported onto this page to help users provide their email addresses. You may be able to find more information about this and similar content at piano.io
Advertisement - Continue Reading Below
More From Celebrity
Jennifer Lopez and Ben Affleck: Everything We Know
Harry & Oprah's Mental Health Doc Has a Title
Advertisement - Continue Reading Below
Serena Williams Might Miss the Tokyo Olympics
Jennifer and Ben Have "Unreal" Chemistry Together
The Sussexes Marked Archie's Bday in a Lovely Way
Queen's Cousin Accused of Selling Access to Putin
Meghan Wore a Meaningful Necklace for Vax Live
How Celebrities Are Celebrating Mother's Day 2021
Gabrielle and Kaavia's Mother's Day Pic is So Cute
Ben Affleck's Moving Tribute to Jennifer Garner