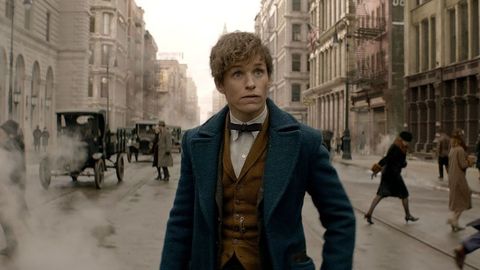 We're already counting down the days until the release of Fantastic Beasts and Where to Find Them, the latest theatrical venture into J.K. Rowling's wizarding world. Fantastic Beasts follows Newt Scamander and is poised to introduce fans to American witchcraft and wizardry.

The movie won't feature our beloved Harry, Ron, and Hermione, but it's making up for it with loads of new characters, mythology, and even some new magic. That's right, Fantastic Beasts will give us a glimpse into a field of magic that was never explored in the Harry Potter series.

Alison Sudol revealed the new power when she told Entertainment Weekly about her character, Queenie Goldstein, who is a Legilimens. The power allows Queenie to read minds, which will surely conjure up memories of Harry's time studying Occlumency with Snape, but her power works in a different way. She's more of an empath, reading people's emotions and motivations.

"She's basically a complete and utter magical empath," Sudol told Entertainment Weekly. "She's able to read people—so it's not just reading somebody's thoughts. She's can read into someone's story, she can see people's goals. And so even though she's able to do magic with her wand, a lot of her magic is actually internal, which makes her a different type of wizard or witch. And she's incredibly fun, playful, joyful, and free-spirited, kind and wise, and also has a sort of stillness about her because she's always tuning into people, so she's quite an interesting character to play—very vivacious and lively, yet very centered and aware."

They definitely didn't teach this skill at Hogwarts. If you need us, we'll be in the Restricted Section reading up on this for the rest of the day.

Kayleigh Roberts Kayleigh Roberts is the weekend editor at Marie Claire, covering celebrity and entertainment news, from actual royals like Kate Middleton and Meghan Markle to Hollywood royalty, like Katie Holmes and Chrissy Teigen.
This content is created and maintained by a third party, and imported onto this page to help users provide their email addresses. You may be able to find more information about this and similar content at piano.io
Advertisement - Continue Reading Below
More From Celebrity
Meet Simone Biles's Super Supportive Parents
What Happens on Katie's Season?
Advertisement - Continue Reading Below
Bennifer Recreated Their 2002 PDA Moment
Why Harry's Memoir Release Date Has Upset People
The Royals Are Worried About Prince Harry's Memoir
Gabrielle Union Debuted a New, Short Haircut
J.Lo Made Out With Ben on IG for Her 52nd Birthday
Harry Is Putting the Queen in a Difficult Position
Are Will & Kate Sending a Message to Harry & Meg?
Harry and Meghan Reportedly Have a Four-Book Deal