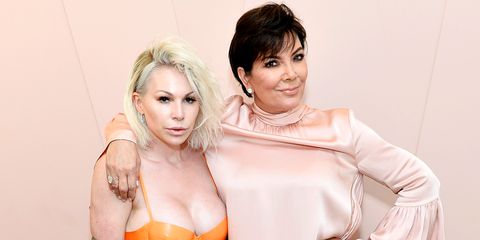 Ready for the Kardashian family feud you didn't quite know you needed today? The Kardashian-Jenners has reportedly parted ways with their longtime makeup artist, Joyce Bonelli. According to Us Weekly, the split was "amicable"—but no one from the family follows Bonelli on Instagram anymore.

"The family doesn't speak to her anymore," an insider told the outlet. "She hasn't worked for them for months. They just stopped working with her because they didn't see it as a right fit anymore. The news comes just two days after Bonelli wished Khloé Kardashian a happy birthday on Instagram. "Ma·tri·arch of lifeeee," she wrote. "Always got your back 😝especially w that glitterrrr." Earlier this month, Bonelli even posted a photo of Kim's daughter, North West.

Although the family has yet to show any signs of bad blood (unlike Kim's very-public split from her assistant, Stephanie Shepherd), the decision to cut ties with Bonelli comes as a bit of a surprise. Bonelli has worked with the Kardashians for over a decade and even referred to them as "her sisters" in an interview with The Hollywood Reporter last year. "We text every other day and we talk about everything," she said at the time.

TBD on whether or not the Kardashians will address the feud—I'd personally like some answers, Kris.