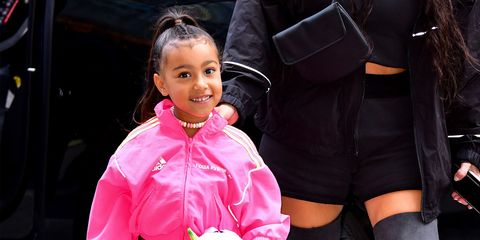 Today is North West's 5th birthday, and I have learned two things: 1. My style is way worse than that of a small child, and 2. The people of the internet love to go in on shit that isn't their business.

After a few paparazzi pics surfaced of North West and her family on a pre-birthday outing yesterday evening, Twitter decided it had some intense feelings about the little celebrity's hair.

Almost immediately, though, the internet took to calling out Kim's choice to straighten her half-black daughter's curly hair:

I really hate how the kardashians keep straightening that poor baby’s hair tho. North west gonna have heat damage before she’s 10- bedore I even knew what a straightener was smh

Related Stories
Kim Kardashian Met With Alice Marie Johnson
It's Not Enough For Kim K. To Just Save One Woman

Listen; I'm a white woman who, thanks to a cloud of inherent white privilege, has never experienced—and will never experience—the same challenges women of color face, so I pass zero judgment on Kim and/or Kanye's decision to straighten North's hair.

Sure, I see why some people are questioning how much control North had over the hairstyle (i.e. was it North's decision to wear her hair straight, or Kim's?), but I will say that I think it's really nobody's business what a five-year-old does with her little baby life, as long as she's safe and loved.

Some people appear to be on the same page as me, since there's a slew of #NorthWest Tweets standing by KimYe's girl:

Were't y'all mad that Blue Ivy's hair was "too nappy" and now you're mad that North West got her hair straightened.

Welp, regardless of where you stand, I vote we try a new thing where we let parents parent their own children.

Related Story
Commence Screaming: Kim Kardashian's Hair Is Blue
Ruby Buddemeyer Beauty Editor Ruby is the beauty editor at Cosmopolitan, where she covers beauty across print and digital.
Advertisement - Continue Reading Below
More From Trending Beauty
Glitter Pumpkin Butts Are a Thing for Halloween
I Tested Meghan Markle's Top Beauty Products
Advertisement - Continue Reading Below
Behold: The Self-Tanner Fail to End All Fails
This Is Pinterest's #1 Halloween Makeup Idea
These 3 Products Cured This Woman's Acne
Princess Eugenie Just Dyed Her Hair Bright Red
13,000 People Swear By This Eye Cream
Post Malone Cut His Hair and Looks Unrecognizable
Shay Mitchell Will Only Use This One Concealer
People Are Freaking Out About Emma Stone's Hair