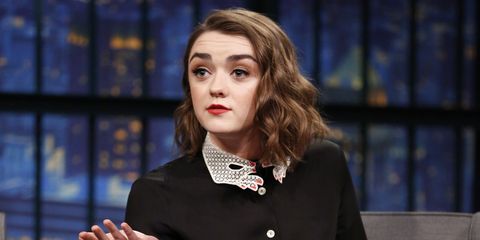 Most of the world has to wait until 2019 to find out how Game of Thrones ends, but there are a lucky few who know who ends up on the Iron Throne—like the cast and crew of the show, for example.

Today, Maisie Williams, who plays misunderstood middle child turned badass assassin Arya Stark on the hit series, shared a picture from her final day on set that miiiight have spoiled the ending of the show. Or at least hinted at a spoiler. Or possibly just thrown us all off the scent of what really happens.

The picture is of Maisie's very modern sneakers, covered in blood splatters while she stands in what appears to be an elevator. The caption reads, "Goodbye Belfast. Goodbye Arya. Goodbye Game of Thrones. What a joy I’ve had. Here’s to the adventures to come."

Nothing too exciting there, right? Just a young actress saying goodbye to the show and the character she grew up with and looking forward to her next steps, right?

The hashtag that really caught fans' eyes, of course, was the first one: #lastwomanstanding.

Is this Maisie's way of telling the world that Arya Stark outlives every other character on the show (or, at very least, every other female character)? Does this just mean that she was the last actress on the show to wrap production? Is she trying to trick us into thinking Arya sits on the Iron Throne when really she goes out in a blaze of glory fighting the Night King? WHO KNOWS? But we'll definitely spend the next year thinking about it, that's for sure.

Related Story
Emilia Clarke Says Goodbye to 'Game of Thrones'
Kayleigh Roberts Contributor Kayleigh Roberts is the weekend editor at Marie Claire, covering celebrity and entertainment news, from actual royals like Kate Middleton and Meghan Markle to Hollywood royalty, like Katie Holmes and Chrissy Teigen.
This content is created and maintained by a third party, and imported onto this page to help users provide their email addresses. You may be able to find more information about this and similar content at piano.io
Advertisement - Continue Reading Below
More From Celebrity
Beyoncé Stuns in a Mesh Dress With Matching Gloves
Lizzo and Chris Evans Had the Best IG Interaction
Advertisement - Continue Reading Below
Travis Shared PDA-Heavy Bday Tribute to Kourtney
How the Queen Ends Awkwardly-Long Handshakes
The Queen Has a Rule Against Bad Talking Family
The Queen Took a Pic of Philip With Her to Funeral
The Queen's Tolerance Was the Key to Her Marriage
J.Lo "Likes" Shady IG Post After A-Rod Split 👀
Beyoncé Shares Photos of Her White Power Suit
Will & Kate Welcomed Harry Back Into Their Group