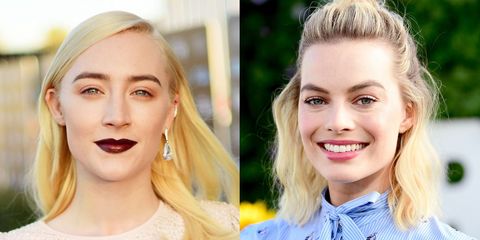 The first official trailer of Margot Robbie and Saoirse Ronan's highly anticipated film Mary Queen of Scots is finally here. The film—which hits theaters on December 7—centers on Elizabeth I (Robbie) and Mary Queen of Scots' (Ronan) epic fight for the English throne in the 1500s.

Mary Queen of Scots is directed by Josie Rourke, who took to Twitter yesterday to share her excitement. "I had the best and most inspiring time working with these two great [women] on the film," she wrote of Robbie and Ronan. This is the first time Robbie and Ronan will co-star in a film—and after spending the last year starring in some insane movies on their own (Ronan in Lady Bird! Robbie in I, Tonya!), it's likely the duo will kick ass together.

I had the best and most inspiring time working with these two great woman on the film. Saoirse Ronan and @MargotRobbie. #MaryQueenofScots @FocusFeatures @Working_Title @MaryQueenMovie pic.twitter.com/jDZl85R8Ep

The film also features a slew of impressive supporting actors, including Jack Lowden, Gemma Chan, and Joe Alwyn (a.k.a. Taylor Swift's boyfriend). Check out the trailer, below, and then join me in counting down the days until its December release.