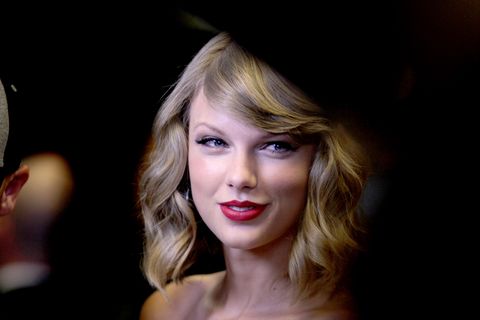 Today in news that is so important that it warrants an alert on my phone: Taylor Swift and boyfriend Joe Alwyn touched yesterday.

Have you picked yourself up off the floor to read WHERE yet?

Would you hike in these jeans, Joe?!
Getty Images

The two were photographed in Malibu on a hike, like normals. This is the first time they've been seen together since December when they were "spotted hand in hand," according to E! News.

Swift wore shorts and a tank, for what was reportedly a 90-minute hike, while Alwyn chose the slightly less practical jeans and a T-shirt combo. I'd call this out for being odd (wasn't he hot? don't jeans chafe?), but once, my boyfriend wore a fancy button-down shirt when we went on a hike on an 80-degree day and he didn't sweat one drop. Meanwhile, I got a supreme sunburn in my weather-appropriate workout top so...who am I to judge?!

Anyway, Swift and her British beau didn't appear to be troubled by their athletic-wear (or lack thereof). According to an onlooker they had a grand old time: "They appeared very comfortable in one another's company and seemed to be enjoying their time together—despite having a bodyguard following their every move," the source said. "They were deep in conversation for most of the hike and their attention was focused solely on one another."

Two appeared to be in a "good mood and seemed very relaxed," the source continued. Though I have a feeling being followed by the paparazzi during a hike didn't help the mood.

Anyway, you can check out the photos and get some hiking (or touching!) inspo here.

Sally Holmes Editor in Chief Sally is the Editor in Chief of Marie Claire where she oversees coverage of all the things the Marie Claire reader wants to know about, including politics, beauty, fashion, and celebs.
This content is created and maintained by a third party, and imported onto this page to help users provide their email addresses. You may be able to find more information about this and similar content at piano.io
Advertisement - Continue Reading Below
More From Celebrity
Lady Gaga Wears Athleisure and Platform Shoes
Meghan Markle Possibly Shared a Photo of Lilibet
Advertisement - Continue Reading Below
The Kardashians' Most Body-Confident Nude Shoots
What Happens on Katie's Season?
Britney Spears Says She Was Locked in a Bathroom
Kate and William Holiday In Cornwall
Blake Lively Wears a Pink Sequin Dress
Meghan Markle Hangs Out With Melissa McCarthy
Simone's Boyfriend Sent Her the Sweetest Message
Rebel Wilson Recreated This Britney Spears Look