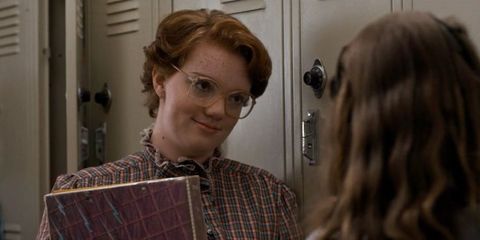 Warning: This post contains spoilers for Season 1 of Stranger Things.

If you finished your binge of Stranger Things feeling less-than-great about Barb's fate, you're not alone. The fan-favorite character, played by Shannon Purser, was killed off and then seemingly forgotten, which didn't sit well with Barb's legions of binge-watching followers.

"We'll make sure there's some justice for Barb," Duffer went on to say. "People get very frustrated, understandably, that the town doesn't seem to be really dealing with Barb. That stuff is all happening. We're just not spending any screen time on it."

Okay, so apparently some people on the show—like Barb's parents, for example—do care that she's gone. We just didn't get to see those moments. In case you're still feeling more than a little frustrated by the decision to omit all traces of Barb mourning from the show, Duffer reminds us that the events of the show happen very quickly and the surviving characters had a lot to deal with.

"Season 1 actually takes place over the course of six or seven days—it's a really short period of time," Duffer explained to IGN. "So part of what we want to do with hypothetical Season 2 is to explore the repercussions of everything that happened."

And exploring those repercussions will apparently include a little #JusticeforBarb.

Of course, that can only happen if Stranger Things gets renewed for a second season. We're still waiting on Netflix to announce the instant cult classic's fate, but NME reports that Netflix CEO Reed Hastings recently admitted the company would "be dumb not to" greenlight a second season.