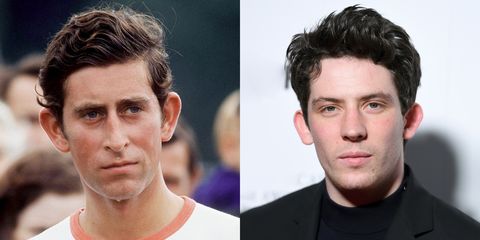 When you’ve had your fill of the real life royal family's magical moments (Harry and Meghan’s screen-worthy kiss yesterday, for example), The Crown is here to deliver. Following on from Netflix dropping the first pictures of Olivia Colman as Queen Elizabeth, and Helena Bonham Carter as Princess Margaret, the show has now revealed your first look at other key members of the family who’ve been cast for season three.

Stepping up to take on the role of Prince Charles through his early twenties is actor Josh O’Connor. And yes, I’m just going to say it, we will all inevitably have a crush on him by the end of the first episode. Netflix's confirmation that O’Connor has landed the part for season three will reportedly see him tackle some of the most difficult storylines in royal family history, involving his relationships with Princess Diana and Camilla Parker Bowles. Pointing out his own uncanny resemblance to the future King of England, Josh said: "Seasons three and four will follow some of the most turbulent events in the Prince of Wales's life and our national story and I'm excited... I’m reliably informed I have the ears for the part and will fit right in.” I'm glad he said it so I didn't have to.

Meanwhile, Marion Bailey, who admitted that she’s already a huge fan of the show, will take on the formidable yet lovable Queen Mother. “We have a tough act to follow but what a gift to be playing the fascinating and greatly loved Queen Mother,” she told Netflix. Completing today’s casting announcement is Erin Doherty to take over the role as Princess Anne, who said that she’s looking forward to playing “a woman of strength and heart—I feel privileged to fight her corner.”

Marion Bailey will play the Queen Mother in The Crown Season Three. pic.twitter.com/T6JX2D8Qyg

As much as we’re all inevitably going to miss Claire Foy, Matt Smith, Vanessa Kirby and co., let’s be real here. This new lineup looks PERFECT to take over.

Related Story
When Will 'The Crown' Introduce Princess Diana?
Lucy Wood Contributor, MarieClaire.com Lucy Wood spends most of her time writing about celebby things, reading books, and waiting for the glorious day that she have enough millions for a pet sloth.
Advertisement - Continue Reading Below
More From Celebrity
A Look at Royal Family Portraits Through the Years
Are The Weeknd's 'After Hours' Lyrics About Bella?
Advertisement - Continue Reading Below
Kendall and Harry Had a Moment At the Brit Awards
Dwyane Wade on Getting Zaya's Pronouns Right
Harry Styles' Diana-Inspired Brit Awards Outfits
Jenna Dewan and Steve Kazee Are Engaged
Kim Seemingly Tried to Kiss Kanye on a Kiss Cam
Ashley Graham Continues to Spread Body Positivity
'Bachelor' Victoria F. & Peter's Ex Had a Fight
Watch Meghan Attend the Ballet with a Puppet