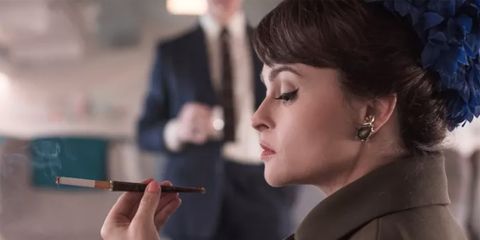 After Netflix dropped the first photo of Olivia Colman as Queen Elizabeth on Monday, I assumed we were looking at a painfully long wait for the next sneak peek of The Crown season three. But, goddammit, they've done it again—the streaming service just released the first look at Helena Bonham Carter as Princess Margaret.

Bonham Carter is set to replace Vanessa Kirby as the Queen's sister in season three. "I'm not sure which I'm more terrified about—doing justice to the real Princess Margaret or following in the shoes of Vanessa Kirby's Princess Margaret," Bonham Carter said when she confirmed her role last month. "The only thing I can guarantee is that I'll be shorter than Vanessa." Kirby—who played Margaret in the show's first two seasons—just snagged an Emmy nomination for Outstanding Supporting Actress in a Drama Series.

But wait, there's more! Netflix also threw in the first photo of Princess Margaret's husband Antony Armstrong-Jones, who will be played by Ben Daniels.

Welp, as much as I'm going to miss Claire Foy and Kirby, I'll admit that season three is shaping up to be one hell of an ensemble.

Related Story
Everything We Know About 'The Crown' Season 3
This content is created and maintained by a third party, and imported onto this page to help users provide their email addresses. You may be able to find more information about this and similar content at piano.io
Advertisement - Continue Reading Below
More From The Crown
Princess Diana's Butler Talks 'The Crown'
Yes, Prince Charles Really Survived an Avalanche
Advertisement - Continue Reading Below
'The Crown' Copied Princess Di's Style Perfectly
Who Are Margaret Thatcher's Kids, Carol and Mark?
Who Is Sarah Spencer in 'The Crown'?
Princess Diana's Wedding Dress Is Now on ﻿Display
'The Crown' Season 4 Is Coming So Soon
Will Harry & Meghan Feature on 'The Crown'?
Imelda Staunton Will Play the Queen In 'The Crown'
Fact-Checking the Third Season of 'The Crown'