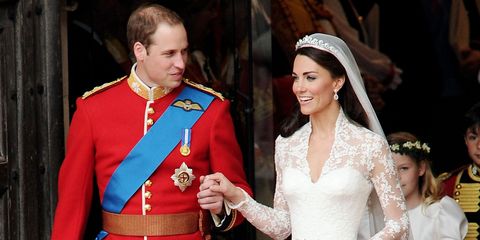 Being royal comes with a lot of rules, but sometimes, the members of the royal family decide to go against the grain and break them. Prince Harry and Meghan Markle are thought of as the more unconventional royal couple, with their PDA and modern wedding decisions, like Meghan walking herself partway down the aisle. Prince William and Kate Middleton were also a little unconventional when it cam to their wedding in 2011, it turns out.

According to Express, Will and Kate stayed overnight in Buckingham Palace after their day of wedding festivities (which included a televised ceremony and several parties, just like Harry and Meghan's). It might not seem like a big deal (except, you know, that it's Will's grandma's house which is admittedly a little weird for anyone celebrating their first night as a married couple), but it is. Royals traditionally leave for their honeymoon on the day of their wedding.

For context, when Queen Elizabeth and Prince Philip were married in November 1947, they spent their first night as a married couple in Broadlands, Hampshire. In 1973, Princess Anne and Mark Phillips left immediately for a honeymoon cruise on the Royal Yacht Britannia after their wedding day balcony appearance. As of now, it's still unknown where Prince Harry and Meghan Markle spent their wedding night when they tied the knot in May.

Will and Kate had a good reason for bucking tradition in this case, however—Will had to work right after the wedding. At the time, Will worked as a search-and-rescue pilot (he's since given up the job to focus on royal duties full time) and the couple wasn't able to leave for a honeymoon until 10 days after the wedding. The trip was worth the wait though; Will and Kate honeymooned on a private island in Seychelles.

Related Stories
Prince George Spends Birthday on a Private Island
The Royal Baby Already Broke a Royal Record
Kayleigh Roberts Contributor Kayleigh Roberts is the weekend editor at Marie Claire, covering celebrity and entertainment news, from actual royals like Kate Middleton and Meghan Markle to Hollywood royalty, like Katie Holmes and Chrissy Teigen.
This content is created and maintained by a third party, and imported onto this page to help users provide their email addresses. You may be able to find more information about this and similar content at piano.io
Advertisement - Continue Reading Below
More From The Ultimate Guide to the Royal Family
Is Harry & Meghan's Archewell Update a Royal Diss?
Why Is the Royal Family Called "The Firm?"
Advertisement - Continue Reading Below
Palace Is Looking Into Meghan Bullying Allegations
Meghan & Eugenie Are Still Close After Royal Exit
Harry's Oprah Interview Suit Is a Nod to Archie
Meghan and Harry Blame the Palace for New Article
A Look at Royal Family Portraits Through the Years
A Look Back at Princess Anne's Life in Photos
Shop Meghan's Stunning $30 Summer Dress
Duchess Kate Wears a Sleek Green Blazer