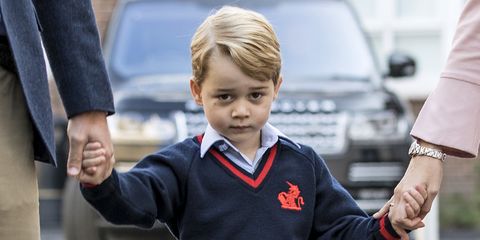 Normal five year olds celebrate their birthdays with cardboard hats and streamers. Princes do things a little differently. Prince George is five today and the young prince is reportedly celebrating on a private island with his family. NBD, right?

Earlier this week, reports suggested that the Duke and Duchess of Cambridge were planning a family getaway—their first vacation as family of five. Will and Kate reportedly chose the island of Mustique as the destination for their trip, which coincides with George's fifth birthday.

Kate's family is reportedly invited along on the trip, as well, but don't get too excited for family pictures—the island is a no fly zone, which means zero paparazzi. A press-free trip has to be appealing to any celebrity, but especially a royal. Will and Kate have been to the island twice before, first in 2012 and again in 2014, when George was very young.

Sources close to the royal family say the trip was Kate's idea and that she wanted to get away since it's been so long since she's had a real vacation. Considering she spent the year welcoming her third child and then immediately attending huge public functions like Prince Harry and Meghan Markle's wedding and the Queen's Trooping the Color celebration, she definitely deserves a real break.

"Kate hasn’t had a proper holiday for a long time she was saying only recently she is desperate to go back to Mustique," a source told Vanity Fair’s Katie Nicholl. "It’s very likely they have gone with Kate’s family for a nice long break.”

View On Instagram
Kayleigh Roberts Contributor Kayleigh Roberts is the weekend editor at Marie Claire, covering celebrity and entertainment news, from actual royals like Kate Middleton and Meghan Markle to Hollywood royalty, like Katie Holmes and Chrissy Teigen.
This content is created and maintained by a third party, and imported onto this page to help users provide their email addresses. You may be able to find more information about this and similar content at piano.io
Advertisement - Continue Reading Below
More From The Ultimate Guide to the Royal Family
William Will Suffer "Worst" from Harry's Memoir
Harry's Friends Don't Want to Be in His Memoir
Advertisement - Continue Reading Below
Will & Kate's Modern Approach to Raising George
Why Harry's Memoir Release Date Has Upset People
The Royals Are Worried About Prince Harry's Memoir
Harry Is Putting the Queen in a Difficult Position
Are Will & Kate Sending a Message to Harry & Meg?
Harry and Meghan Reportedly Have a Four-Book Deal
Rare Photos From Diana and Charles' Wedding
Prince George Looks So Grown-Up in New Portrait