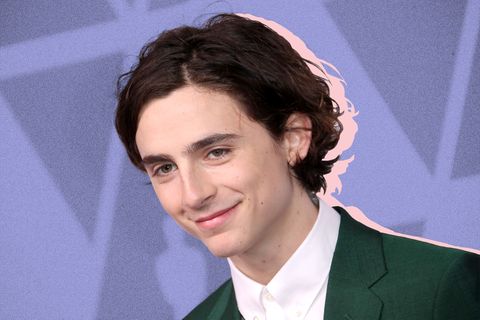 Hi sweeties, welcome back to another edition of This Week in Timothée Chalamet. Are you doin' OK? Staying hydrated? Taking an occasional break to get up and stretch your legs? It's important to do that for blood flow, so I have read.

I’m sorry to say it, but this week’s edition will be brief. Not only is Timmy MIA on social media and even in the tabloids (a place I told you I’d never go and yet I went!), but we are deep in the summer doldrums and I want to take a nap under a tree in the park instead of stare at a laptop. Did you know in many European countries, workers get the entire month of August off? I’ll never leave you, of course, but...food for thought.

Fam, there’s not a ton to report. My Google alert for Timothée Chalamet, normally such a font of unalloyed bliss, has been very sad the past week. And I would know because this very column appeared in it, and when Google starts to consider this a legitimate source on anything—even Timothée Chalamet news—I suspect they’re scraping the bottom of the barrel.

I’m not going to repeat or even link to the rumor she’s referring to because not only is it slanderous and very likely untrue, but it's also UTI-shaming. How can we have important conversations about how to be responsible about sexual health if we’re so quick to stigmatize, bbs?!

But the point is, it was a sloooooow week in Timmyland.

I’m a little late to the party on this one, but the podcast Playing On Air—in which famous and up-and-coming performers act out radio plays—has not one, but two episodes featuring Timmy Tim (shout-out to i-D for finding).

The plays he’s in—John Patrick Shanley’s Tennessee and Donald Margulies’ Misadventure—are both beautiful works, and his voice is well-suited to them. Tennessee, I think, is particularly moving—about restlessness and the future and youth and oblivion—and it also prominently features Timothée with a Southern accent. I’m typing this, so you can't hear the guttural thirst-sound that emitted from my body involuntarily by merely remembering this factoid, but you can probably imagine.

Listen to Misadventure and Tennessee here.

IDK, I guess we could just look at his part.

Sometimes I feel like he's a kitten, though. Like, I can feel myself still loving him but being far less interested in him as the slow march of time creeps forth. But ANYWAYZ.

And that's...it. I know, it was a paltry week out there, Timothéians. Here's hoping Mr. Chalamet graces us with his social media presence in the next seven days. For now, a parting gift: