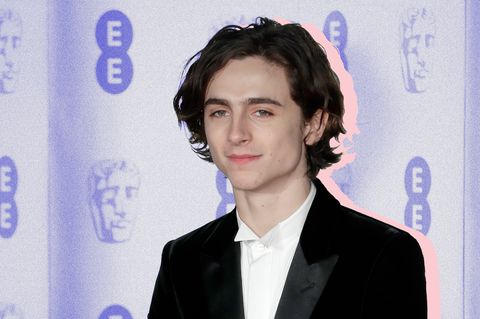 Happy Friday, sweet babies! I’m so happy we’re all together again for this edition of This Week in Timothée Chalamet. I know the week has been politically chaotic, but I hope you found some time in there to take some deep, cleansing breaths and feel the warmth of the sun on your face.

Before we begin, I want to address a question that a couple of you lovely folks brought up on Twitter after last week’s column failed to discuss some rumored make-out or something that Timmy engaged in: Why don’t we talk about the gossip around Timmy's love life on here?

The thing is, while I might personally want to know that stuff every once in a while, this column isn’t really about that. Instead, we look at his work and his fandom more holistically. Chalamet stans are supportive, creative people through whom we can glimpse what it means to be a fan and, in turn, what it means to be a celebrity in the year 2018. In that way, “This Week in Timothée Chalamet” is only marginally about Timothée Chalamet The Person, and more about Timothée Chalamet The Concept. His actual personal life won’t typically factor in, until it does. Does that make this column a repeated exercise in postmodernism and metanarrative, akin to the novels of Roberto Bolaño or William Faulkner? IDK, I don’t really like to put my work into boxes like that! If you were to say that TWITC is MarieClaire.com’s Absalom, Absalom!, it's not like I would be able to stop you.

Lét’s see what else he was doing this week!

Timmy is set to star in a reboot of Dune.

Deadline reports that Timothée is in final talks to star in the relaunch of the film Dune, a sprawling sci-fi epic based on the 1965 Frank Herbert novels of the same name. This new movie will be directed by Denis Villeneuve, who also directed Arrival and Blade Runner 2049—an impressive track record of nuanced sci-fi movies!

Timmy will play the role of Paul Atreides, who is trying to save his planet, Arrakis, from being destroyed in a battle over the rare substance, Spice Melange—which I'm pretty sure is also the name of the Amy’s grain bowl I like best.

A reason to care about this news, aside from the fact that it involves Timothée, is that the original film Dune, made in 1984 and directed by David Lynch, is allegedly one of the worst movies ever made. It had a massive budget and the studio took a risk on hiring Lynch because he was an auteur who had never worked with that kind of studio money before. The result was campy and slow and hard to follow. I like how David Foster Wallace put it in his 1996 essay “David Lynch Keeps His Head” the most:

Watching Dune again on video you can see that some of its defects are clearly Lynch’s responsibility, e.g. casting the nerdy and potato-faced Kyle MacLachlan as an epic hero and the Police’s resoundingly unthespian Sting as a psycho villain, or—worse—trying to provide plot exposition by having characters’ thoughts audibilized (w/ that slight thinking-out-loud reverb) on the soundtrack while the camera zooms in on the character making a thinking-face, a cheesy old device that Saturday Night Live had already been parodying for years when Dune came out. The overall result is a movie that’s funny while it’s trying to be deadly serious, which is as good a definition of a flop as there is, and Dune was indeed a huge, pretentious, incoherent flop.

I can’t personally attest to this movie’s awfulness because, though I’ve tried to watch the original Dune film, like, four times, I inevitably fall asleep within ten minutes. Something about an '80s laser sound effect hits me like a tranquilizer dart, I think.

So with that really low bar, you could do way, way worse than casting Young Master Chalamet as the lead. We’ll see how it goes!

He finally tweeted, this time about soccer.

Did y’all watch the World Cup? I sort of did, in that I was in France at the time and couldn’t physically avoid gazing upon its terrible visage. Frankly, I find sports in general dull and sports where you can watch 90 minutes of gameplay that ends in a 0-0 tie even duller, but at least soccer has the sexiest players.

If you think about it, sports don’t really make sense, even symbolically. I get that they’re supposed to be representative of man’s accomplishment and a society’s civic pride, but it’s not like most of the players of, like, the Los Angeles Lakers (just as an example) are even from L.A. Most sports are just a capitalistic dick-measuring contest over which city has more taxpayer money to throw into events and venues so that said city’s residents may have the distinct pleasure of paying more of their own money to attend those events—and hopefully buying the products advertised nearly constantly during them—all while being convinced that the team’s victory says something about their own individual ability to achieve in the face of pressure. And this while watching athletes who’ve systematically abused their bodies for years on the wildly unlikely hope that they may actually get paid to do it one day. And this is despite the fact that even in college, these players—who weren’t themselves being paid anything—were still putting tons of money into the pockets of rich, predominantly white men, and they will continue to do so for the next ten years (if they’re lucky!), until their bodies fully break down at the ripe age of, like, 32. And just to be clear, I'm not saying players are bad, I'm saying the institution is broken. Sports are, for the most part, a gladiatorial and excessive (not to mention often racist and sexist) flex of late capitalism and we’d be better off as a species if they didn’t exist.

What was I talking about? Oh yeah, Timothée Chalamet tweeted about the World Cup.

Earlier in the day Sunday, he wrote the following (his first social media post in weeks, mind you!):

That’s the winning roster of the '98 French World Cup team, which won the World Cup when Timmy was two years old. Then, less than an hour later, he tweeted:

Those are the names of this year’s winning team. You will recall that Timmy’s father was born in France and that Timmy is fluent in French and also that his name has l’accent aigu, which is hella French of him, tbh.

The next World Cup takes place in 2022, in Qatar, where over 1,200 workers (most of them migrants) have already died building the event’s stadiums as a result of exploitative labor conditions. The International Trades Union Confederation predicts that 4,000 workers will die building World Cup stadiums in the country by the time the first match kicks off four years from now. That’s about three workers a day.

But congratulations to Timothée Chalamet and the nation of France.

This photograph is my religion.

Can we talk about something happy? Like, how Cher and Meryl Streep kissed at the Mamma Mia: Here We Go Again premiere?

Fun fact: Cher, despite being only four years older than Meryl, plays her mother in the film. This is the best photo I’ve ever seen, even if its inclusion in this column seems neither here nor there.

Nevertheless, I’m pretty sure I can tie back this into Timothée Chalamet. For example, as we’ve discussed before, Timmy is set to star in Greta Gerwig’s Little Women reboot, and Meryl Streep will also star in it as Aunt March. Also, similarly to how I don’t know if I want Timmy to be my son or my boyfriend, I don’t know whether I want to cut into the middle of this smooch or beg these women to adopt me. Maybe both? Aroused, confused, dying to be nurtured—that’s 2018, my friends.

Since Mamma Mia: Here We Go Again hits theaters the same day this column goes live, I’m not ashamed to tell you that I'll probably see it this weekend while clandestinely drinking a bag of wine from my purse. I hope you’ll join me, even if just in spirit.

Have a glorious weekend, you rays of sunshine.