Yesterday, the music world came to a standstill when it was announced that the legendary soul singer Aretha Franklin had died aged 76, surrounded by family and friends after a long battle with pancreatic cancer. Tributes from fans and celebrities quickly flooded social media, including a touching post from Ariana Grande. Grande, who has often cited Franklin as one of her greatest inspirations, then honored the icon with a performance dedicated to her life on The Tonight Show.

Taking to the stage with music from The Roots, Ariana gave a powerful and emotional rendition of Aretha’s classic hit, “(You Make Me Feel Like) A Natural Woman” while dressed all in black, and the heartfelt vocals are enough to bring anyone to tears.

TMZ reports that the singer was originally only scheduled to take part in a comedy skit on the show, but was asked last-minute to perform in the wake of the news of Franklin’s passing. It’s reported that Ariana initially declined the invitation as she was too overcome with emotion, but was eventually convinced to take the stage in tribute. Sources say that, after making it through to the end and bringing the house down with her performance to a standing ovation, Ariana later broke down in tears backstage.

Remembering Aretha as she spoke to Jimmy Fallon later, Grande shared the story of a phone call that she once received from her musical hero. “I met her a few times, we sang at the White House and she was so sweet and cute. I was like, how are you a real person? It’s an honor to have met her and we’re going to celebrate her. She called me one time only, and she goes, ‘Hi, it’s Aretha,’ and I was like, ‘...Franklin?’ There’s only one Aretha.”

In a statement to announce her death, family of Franklin said: "In one of the darkest moments of our lives, we are not able to find the appropriate words to express the pain in our heart. We have lost the matriarch and rock of our family." 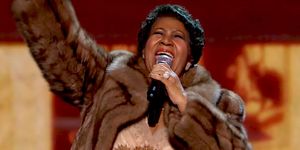 Aretha Franklin's vocals made Barack Obama cry
Lucy Wood Contributor Lucy Wood spends most of her time writing about celebby things, reading books, and waiting for the glorious day that she have enough millions for a pet sloth.
This content is created and maintained by a third party, and imported onto this page to help users provide their email addresses. You may be able to find more information about this and similar content at piano.io
Advertisement - Continue Reading Below
More From Celebrity
How Celebrities and Friends Are Supporting Meghan
Meghan Didn't Need Prince Harry to Be Wealthy
Advertisement - Continue Reading Below
Pregnant Emma Stone Runs Errands in Santa Monica
The Queen Reportedly Got Two New Corgi Puppies
Meghan in New Clip: Royal Family Is "Different"
Gwen Stefani Is Unrecognizable In New Insta Post
Lady Gaga Wore Serious Platform Heels in Rome
North West's Pet Lizard Has Its Own SKIMS
Is Harry & Meghan's Archewell Update a Royal Diss?
Why Is the Royal Family Called "The Firm?"