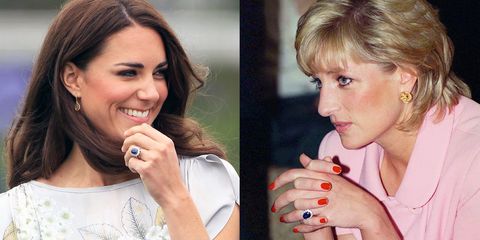 For today's lesson in things you never knew about the royal family, let's talk about Kate Middleton's engagement ring.

The first thing you need to know about Kate's stunning sapphire ring is that it was originally Princess Diana's engagement ring, back when she was preparing to tie the knot with Prince Charles.

The second thing you need to know about the ring is that it has a long history of controversy in the royal family, dating back to when Diana picked it out. The story starts in 1981, when Prince Charles presented Diana with a selection of rings to choose from for her engagement ring, according to Vogue. The rings came courtesy of Garrard, who was the crown jeweler at the time.

Diana selected the Ceylon sapphire stone set in white gold that has since become iconic. Here's where the controversy comes in—the ring was a "stock item." Meaning? It wasn't bespoke and any old commoner with enough money could buy exactly the same ring. Oh, the horror, right?

Clearly, Diana didn't care about this one bit. She loved the ring and continued to wear it after her divorce from Charles in 1996.

When Will and Kate got engaged in 2010, he proposed with his late mother's beloved ring, saying it was his "way of keeping her close to it all," according to OK!.

Kate, for her part, was also thrilled to be wearing the "controversial" bauble. "It’s beautiful – I hope I look after it! It’s very special," she said at the time.

Kayleigh Roberts Contributor Kayleigh Roberts is the weekend editor at Marie Claire, covering celebrity and entertainment news, from actual royals like Kate Middleton and Meghan Markle to Hollywood royalty, like Katie Holmes and Chrissy Teigen.
This content is created and maintained by a third party, and imported onto this page to help users provide their email addresses. You may be able to find more information about this and similar content at piano.io
Advertisement - Continue Reading Below
More From The Ultimate Guide to the Royal Family
Will & Kate Welcomed Harry Back Into Their Group
Queen Left a Handwritten Note on Philip's Coffin
Advertisement - Continue Reading Below
The Queen Said Grief Is the Price We Pay for Love
All of the Photos from Prince Philip's Funeral
The Queen Wore This Brooch to Philip's Funeral
Kate Middleton's Nod to Diana at Philip's Funeral
Queen Elizabeth Appears at Prince Philip's Funeral
Harry Back With Will & Kate at Philip's Funeral
How Prince Harry and Meghan Honored Philip Today
A Look Back at Princess Anne's Life in Photos