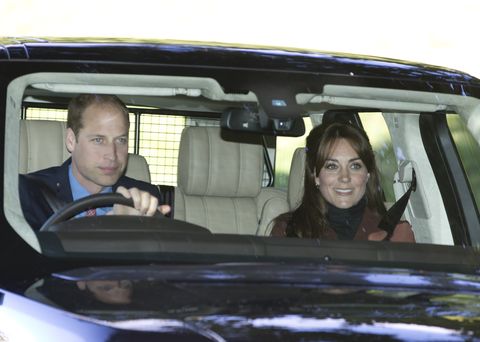 Normal kids have milestones like "first day of school" and "first time tying their shoe all on their own." Royal kids have...different milestones. This weekend, Prince George hit a uniquely royal milestone when he participated in his first grouse shoot at Balmoral Castle in Scotland. There's a lot about that sentence that is very specific to royals, but a five-year-old going out on a hunt for large-ish birds, that has "very old royal tradition" written all over it.

Details about George's big weekend come courtesy of Emily Andrews, the royal correspondent for The Sun. In a tweet, Andrews explained that George was actually taken on his first grouse shoot on Friday, accompanied by his mother, Kate Middleton.

The whole royal family was in tow to celebrate George's milestone though. According to Andrews, the Queen, Prince Charles, Prince Edward and his wife, Sophie, as well as their children, Louise and James, Princess Anne, and Anne's daughter, Zara, and her husband Mike Tindall, all joined George and Kate for lunch after the big shoot.

While they weren't reported to be at the post-grouse shooting lunch, Prince William, Princess Charlotte, and baby Prince Louis are all also reportedly vacationing in Balmoral too, Hello! reports.

The trip is very special for Will, Kate, George, and Charlotte in particular. The Duke and Duchess of Cambridge stayed in Balmoral for the first few years of their oldest children's lives before relocating to London to take over more official royal duties. Balmoral is also known to be a favorite place of Queen Elizabeth's; she visits the castle every summer.

Kayleigh Roberts Contributor Kayleigh Roberts is the weekend editor at Marie Claire, covering celebrity and entertainment news, from actual royals like Kate Middleton and Meghan Markle to Hollywood royalty, like Katie Holmes and Chrissy Teigen.
This content is created and maintained by a third party, and imported onto this page to help users provide their email addresses. You may be able to find more information about this and similar content at piano.io
Advertisement - Continue Reading Below
More From The Ultimate Guide to the Royal Family
A Look at Royal Family Portraits Through the Years
A Look Back at Princess Anne's Life in Photos
Advertisement - Continue Reading Below
Kate Had a Big Regret About Her Engagement to Will
An Attack Dog Once Mistook Will for an Intruder
The Queen Is Still Prince Harry's Mentor
Harry Was Homesick for a While, But Is Happy Now
Meghan Wasn't Appreciated for Royal Contributions
Harry & Meghan Have Had a Painful Year Since Exit
The Queen's Hot Grandnephew Is a Thirst Trap
Watch Diana Play Impromptu Piano in Rare Clip