It goes without saying that being a member of the British royal family means your life is pretty great. But even a Duke and Duchess of Cambridge need a break once in a while. After a busy few months, including birthing a potential future monarch, a worldwide-famous wedding, and endless public appearances, Kate Middleton and Prince William are taking some time out for a family vacation. The trip is set to be quite special; it will be their first as a complete family of five.

But where in the world does a royal couple head to unwind away from the media spotlight? According to Hello!, Kate and Wills have chosen the island of Mustique to spend a quite few days with children Prince George, Princess Charlotte, and Prince Louis.

The secluded island, perfect for a little bit of privacy in paradise, is set to jump straight to the top of every Must-Visit Hot Spot list. The whole royal gang were spotted arriving in St. Lucia earlier this week before boarding a private flight to the Caribbean island of Mustique.

The island, in Saint Vincent and the Grenadies, is about a hundred miles west of Barbados. Expect to find picturesque white sand beaches, a crystal clear, blue ocean and absolutely zero paparazzi thanks to its no fly zone status. It’s a pretty exclusive choice of location, too, as just 100 villas are available to reserve.

According to royal blogger Tea Time with the Cambridges, Kate’s parents were also seen arriving to share the trip, so it’s set to be a whole family vacay. It must be a firm favorite for the Duke and Duchess; the couple have previously spent time in Mustique in 2012 and in 2014 when George was very young. With two more young children in the family this time, their latest trip will probably include a whole lot more ice cream, sandcastle building and swimming pool inflatable assault courses than ever before.

Prince Louis, two months old and already taking better vacations than I ever will. 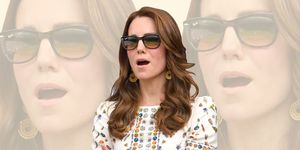