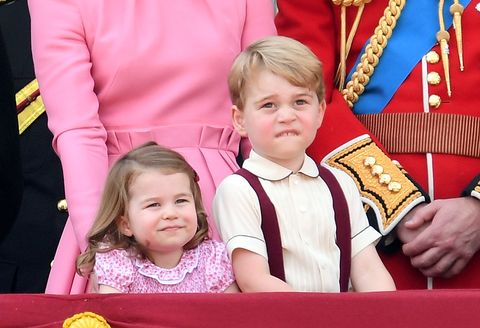 There are certain perks that come with being the Queen. Among them? People have to literally bow down to you—and that includes the rest of the royal family. Prince William, Kate Middleton, Prince Harry, and Meghan Markle all have to bow or curtsey when they meet the Queen and again when they leave. Careful royal watchers have probably noticed that two members of the royal fam don't participate in this tradition: Prince George and Princess Charlotte.

That's all going to change soon, especially for Prince George. Hello! reports that the requirement to bow to Queen Elizabeth kicks in at an early age—usually around age five.

Marlene Eilers Koenig—a royal historian and the woman behind the Royal Musings blog— told Hello! that the bowing/curtsying tradition starts early. "Certainly by age five. The only person they will be curtsy or bow to is the sovereign. A royal highness does not curtsy to another royal highness."

Since Prince George just celebrated his fifth birthday (on a private island, no less), that means we can expect to start seeing him bow down to his great grandmother at public appearances very soon.

Charlotte, who is only three years old, probably has a couple more years of curtsey-free interactions with her great grandma. Although, knowing Charlotte and her penchant for stealing all of the attention when cameras are out, her curtseys will probably be next level adorable when she does start. Prince Louis, who is still a newborn and doesn't even know what a bow or curtsey is yet, obviously doesn't have to worry about this any time soon.

Kayleigh Roberts Contributor Kayleigh Roberts is the weekend editor at Marie Claire, covering celebrity and entertainment news, from actual royals like Kate Middleton and Meghan Markle to Hollywood royalty, like Katie Holmes and Chrissy Teigen.
This content is created and maintained by a third party, and imported onto this page to help users provide their email addresses. You may be able to find more information about this and similar content at piano.io
Advertisement - Continue Reading Below
More From The Ultimate Guide to the Royal Family
46 Moments That Changed the Royal Family Forever
A Look at Royal Family Portraits Through the Years
Advertisement - Continue Reading Below
A Look Back at Princess Anne's Life in Photos
Charlotte Looks Like the Queen and Prince William
Charles Shared a Rare Childhood Pic with Philip
Charlotte Looks So Grown Up in Her Birthday Pics
Harry's Next Trip to the U.K. Is in Serious Doubt
Prince Charles Has *Not* Forgiven Prince Harry
See New William and Kate 10th Anniversary Photos
30 Surprising Royal Pregnancy Traditions