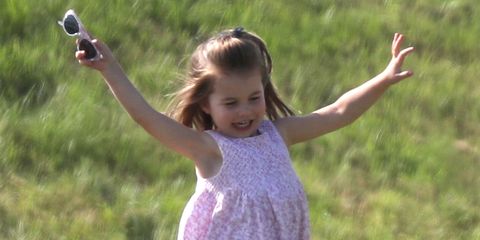 In case you need another reason to be jealous of a toddler, Princess Charlotte, three-year-old human, has officially taken up one of Queen Elizabeth's favorite hobbies. The young royal has started horseback riding, Town & Country reports.

The Queen, who is 92 now, still rides regularly, and has been an avid rider for years.

And here are a few pictures of Elizabeth riding back when her official title was still "princess."

Riding is a favorite hobby among royals in general. Charlotte's big brother, Prince George, reportedly took up the sport at an even younger age—two.

"William and Kate were keen to get George on a horse once he was walking confidently," a source told the Daily Mail of the young prince in December 2015. "George loved his first ride–he was led around a paddock on a rein and shrieked with delight. William and Kate were both there to watch."

Others close to the royals have shared stories of Charlotte's love for riding.

Natasha Baker, a decorated Paralympic Equestrian, got a chance to speak with Kate Middleton during an event with honoring Olympians and Paralympians at Buckingham Palace. During the conversation, Charlotte's love for horseback riding came up.

"I asked her how the children were, and she said Charlotte is really enjoying her riding which is great to hear," Nastasha said of the chat, according to The Mirror. "She emphasized that Charlotte has this passion for horses and although she doesn’t echo it, she’ll do her best to champion and encourage it."