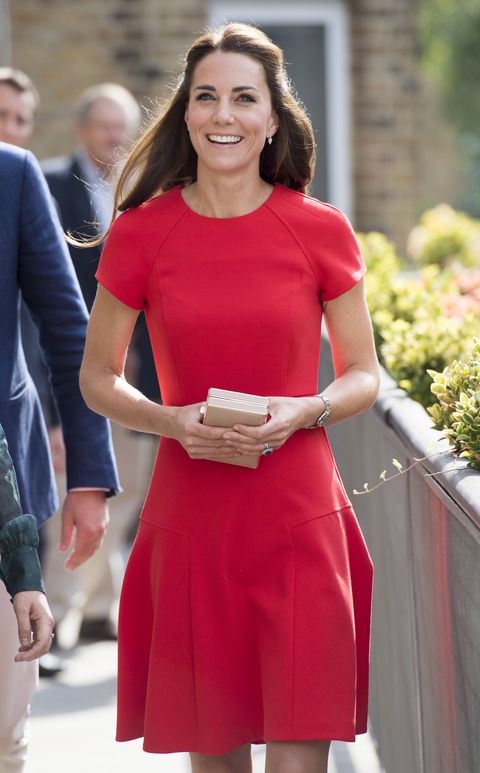 It's easy to think of literally any story of a "commoner" marrying a royal as a Cinderella story, but Kate Middleton was definitely not living that Cinderella lifestyle before she met her Prince Charming. As the Duchess of Cambridge, Kate has a piece of the royal family's massive fortune (the family's overall value is estimated at $88 billion, according to Forbes), but here's a fun fact: Turns out Kate was rich AF before she married Prince William.

Ready for the number? Kate's personal net worth (as in outside of the royal family) is at least £5 million and could be as high as £7.3 million, according to Time (via global wealth-tracking firm Wealth-X). In American dollars, that's a $7 to $10 million dollar fortune.

Kate owes her massive personal bank account to her family, who own a very profitable online party supply business called Party Pieces, which is estimated to be worth £30 million (about $50 million). Of course, the Middleton family biz has definitely benefitted from Kate's association with the royals, which started about a decade before she officially married Will in 2011.

Kate worked at Party Pieces (as well as a buyer for a British retailer called Jigsaw) between graduating from college and settling down with Will. These days, Will and Kate live in Kensington Palace in London, but back in her bachelorette phase, Kate wasn't living in a hovel with roommates and subsisting on ramen and hope like many recent grads. Nope, she was living in a luxe apartment in Chelsea in London that is believed to be worth £1 million, or $1.4 million. Her parents reportedly bought the pad.

William, on the other hand, is worth much more. He and Harry inherited Princess Diana's substantial fortune and are each worth somewhere in the neighborhood of $25 to $40 million, according to Business Insider.

This content is imported from {embed-name}. You may be able to find the same content in another format, or you may be able to find more information, at their web site.
Kayleigh Roberts Contributor Kayleigh Roberts is the weekend editor at Marie Claire, covering celebrity and entertainment news, from actual royals like Kate Middleton and Meghan Markle to Hollywood royalty, like Katie Holmes and Chrissy Teigen.
This content is created and maintained by a third party, and imported onto this page to help users provide their email addresses. You may be able to find more information about this and similar content at piano.io
Advertisement - Continue Reading Below
More From The Ultimate Guide to the Royal Family
Why Harry's Memoir Release Date Has Upset People
The Royals Are Worried About Prince Harry's Memoir
Advertisement - Continue Reading Below
Harry Is Putting the Queen in a Difficult Position
Are Will & Kate Sending a Message to Harry & Meg?
Harry and Meghan Reportedly Have a Four-Book Deal
Rare Photos From Diana and Charles' Wedding
Prince George Looks So Grown-Up in New Portrait
Whatever Happened to Archewell Audio?
Prince Harry Is Set to Publish a Memoir
For Prince George Turning 8 Is a Fashion Milestone