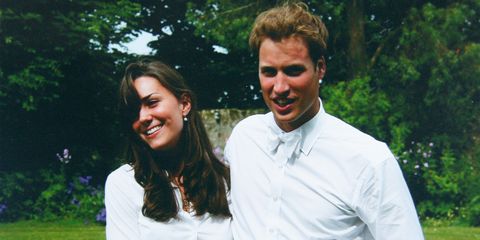 If you thought Prince Harry and Meghan Markle's love story was like something out of a romantic comedy, wait until you read about Prince William and Kate Middleton's first meeting, which was so adorably awkward it feels like it almost had to be scripted—but, of course, it wasn't.

Will and Kate were both living in the same residence hall at university (which is a weirdly normal way for a prince to meet his future wife, right?) when they were introduced and had exactly zero chill between them.

Kate immediately curtsied to Will, which is fair since that's technically how she was supposed to greet royalty. Will responded by spilling a drink all over himself, according to royal biographer Christopher Anderson. Seriously, plug in Julia Stiles and you have almost the exact plot of The Prince & Me.

Years later, Kate was more than willing to cop to being flustered when she met her future husband.

"I actually went bright red when I met you and scuttled off feeling very shy about meeting you," she admitted during their engagement interview in 2010. "William wasn't there for quite a bit of the time initially, he wasn't there from Fresher's Week, so it did take a bit of time for us to get to know each other, but we did become very close friends from quite early on."

Will, on the other hand, played it much more cool during the engagement interview, claiming he had to "wrack his brains" to remember the first time he met Kate and not mentioning the alleged adorkable drink-spilling at all.

K, Will. Whatever you say.