In a world of Hailey Baldwin and Justin Biebers, of Ariana Grande and Pete Davidsons, Katie Holmes and Jamie Foxx stand out for keeping their relationship so top-secret, it might as well be in a file in an FBI cubicle. It's thought that the two have been secretly dating since 2013—yes, as in five years ago 2013—although they've never formally confirmed their relationship (just that they haven't split). On Monday, the couple were hanging out in Georgia, where Foxx is filming Just Mercy, and at one point Holmes sat in Foxx's lap.

Which doesn't sound like a big deal, right? But hear me out. We only started seeing photos of the two of them together this year, meaning they've been sneaking around for longer than an entire presidential term. This entire are-they-or-aren't-they has been a bigger mystery than Area 51. (I think, anyway.)

There's been talk that the two are keeping things "casual"—because, yes, I keep my casual flings to just five years, too—that they're getting married, that they're breaking up, that they're expecting a baby, you name it. Truth is, nobody really knows. Because they Literally. Never. Talk. About. It. Foxx even walked out of an interview instead of answering a question about Holmes.

So all we have to go off is the very, very rare photo of them together, in which they're hardly ever even touching anyway. But: This week, we have this!

I guess they're looking at a map? Or at their phone. Anyway, she's on his lap, which is adorable and makes me happy because they seem happy. From what I can tell. Which is very little. But still! 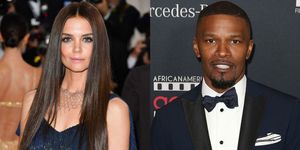 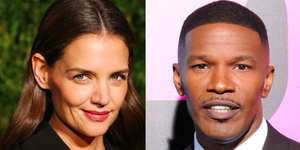 First Official Pics of Jamie Foxx and Katie Holmes
Jenny Hollander Director of Content Strategy Jenny is Marie Claire’s Director of Content Strategy, editing and writing about everything from politics to reality television to accessories and celebrity news.
This content is created and maintained by a third party, and imported onto this page to help users provide their email addresses. You may be able to find more information about this and similar content at piano.io
Advertisement - Continue Reading Below
More From Celebrity
Royal Family Shares Rare Photo of Prince Philip
Chloe From 'Too Hot to Handle' Is in 'The Circle'
Advertisement - Continue Reading Below
There's Drama Over Prince Harry's Funeral Attire
Jennifer's Rep Breaks Silence on Adoption Story
Princess Eugenie's Prince Philip Tribute
Serena Williams Signed a Major TV Deal With Amazon
Chrissy Wrote Luna the Sweetest Birthday Message
Prince Harry Has Met Princess Eugenie's Son August
The Queen Returns to Work After Philip's Death
A Brief History Lesson on Brad and Jen