Daenerys Targaryen: Queen of the Andals, the Rhoynar and the First Men. Protector of the Realm. Queen of Meereen. Khaleesi of the Great Grass Sea. Mother of Dragons. The Unburnt. Breaker of Chains. Lady of Dragonstone. Buster of Dorky Dance Moves.

Here's a fun fact for you, Game of Thrones fans: Emilia Clarke, aka your favorite platinum blonde contender for the Iron Throne, won her part on the HBO drama by doing the robot in her audition.

Clarke just took home the Britannia Award for British Artist of the Year. While presenting her with the honor at the awards ceremony at the Beverly Hilton Hotel, Game of Thrones co-creators David Benioff and D.B. Weiss decided to share a story about her audition process.

According to Variety, Clarke was actually asked to come in for an audition for the president of HBO after the pilot was shot.

Weiss told the audience at the Britannia Awards that the followup audition went down at "HBO’s corporate theater, which was large, dimly lit and empty except for us two and the president of HBO. We were smiling. He wasn’t. It was quite possibly the least inviting audition environment we had ever witnessed."

Clarke did her thing and the HBO exec stayed stony-faced.

"Emilia asked if there was anything else she could do to lighten the mood and David asked, 'Can you dance?' And without missing a beat, Emilia did the robot," Weiss said. "She did it with commitment and she did it well…and even the president had no choice but to smile. She got the job 10 seconds after she left the room and the two of us ran to tell her before she left the building because letting her get on an 11-hour flight home without knowing seemed like cruel and unusual punishment."

Check out Clarke's acceptance speech below: 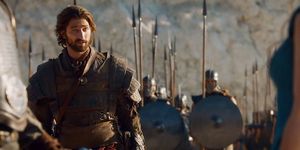 Watch the 'Game of Thrones' Cast Audition Reel
'Game of Thrones' Pics That Destroy the Magic
Kayleigh Roberts Contributor Kayleigh Roberts is the weekend editor at Marie Claire, covering celebrity and entertainment news, from actual royals like Kate Middleton and Meghan Markle to Hollywood royalty, like Katie Holmes and Chrissy Teigen.
This content is created and maintained by a third party, and imported onto this page to help users provide their email addresses. You may be able to find more information about this and similar content at piano.io
Advertisement - Continue Reading Below
More From Celebrity
Beyoncé Wore Tweed Micro Shorts for Date Night
Prince Charles Addresses Prince Philip's Death
Advertisement - Continue Reading Below
Prince William Pulls Out of 2021 BAFTA Appearances
J.Lo Wears a Crop Top and Gold Joggers on Set
Prince Philip Said He Had No Desire to Live to 100
JT Is in the Throwback Pic Britney Posted on IG
The Queen Was by Prince Philip's Side When He Died
Prince Harry Is "Really Upset" Over Philip's Death
Will Harry & Meg Attend Prince Philip's Funeral?
The Queen Is Hopeful Prince Harry Will Return Home