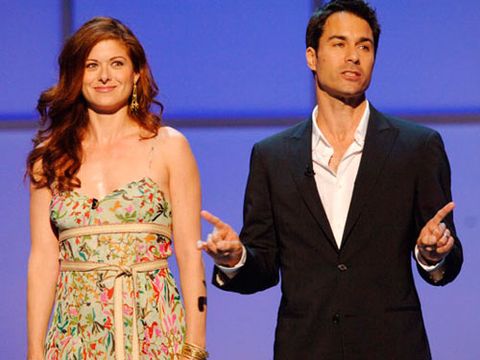 One minute Grey's Anatomy's socially awkward surgeon Erica Hahn (Brooke Smith) is exiting the closet ("I am gay. I am so, so, so gay!"); the next, she's off the show, and her erstwhile girlfriend (Sara Ramirez) is back to straight-sexing McSteamy in the bunk room. Seems Dr. Hahn didn't get the memo that if you're gay and you're on TV, you'd better be smokin' hot. And, preferably, bi.

Social change tends to ebb and flow. ABC broke ground in the late '70s with Soap, when Billy Crystal played TV's first recurring gay character. Dynasty's Steven Carrington, conflicted scion of Colorado oil, sexually flip-flopped his way through the '80s. By the '90s, it was a pile-on: L.A. Law featured the first lesbian kiss on network TV; Melrose Place's inner circle included out-gay Matt; Buffy the Vampire Slayer featured a lesbian couple; Ross's ex married her girlfriend on Friends; and on Will & Grace, it was the straight people who seemed a bit queer. But a decade after Ellen DeGeneres came out on her eponymous sitcom, prominent gay characters have all but disappeared from mainstream TV. Cashmere Mafia's hot-kissing lesbians didn't last a season, and with The L Word banished to cable and Hahn off Grey's, the tally of gay lead characters on network programming is exactly one: Brothers and Sisters' Kevin Walker. And lesbians are nowhere in sight.

"Hot and bi is the new gay," says Mary McNamara, TV critic for the L.A. Times. "On Grey's you had two midlife women whose main purpose was not to provide titillation to the straight audience — that was the plotline's undoing." Indeed, the show quickly "replaced" Smith's character with a toothy, nubile bombshell of a bisexual intern (Melissa George). On her heels comes Arizona Robbins (Jessica Capshaw), a babe-ish, sexually ambiguous visiting surgeon — hot sex as needed? With California voting to delegitimize gay marriage and the networks hedging their bets, we have to ask: Where's the will? Where's the grace?

Lately, TVs have been strikingly straight:

8 The number of gay characters appearing regularly on network TV during the '06 - '07 season.

1 The number of gay lead characters on network TV this season.