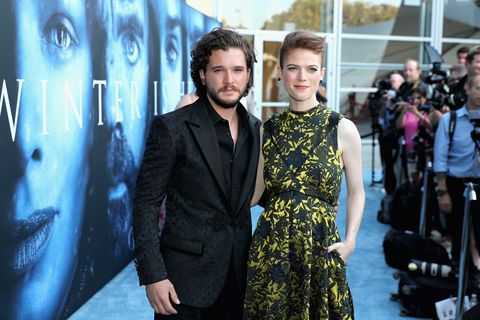 Just five months after their fairytale wedding in June, Game of Thrones stars Kit Harington and Rose Leslie are dealing with a cheating scandal.

A Russian model named Olga Vlasova (she's also an actress and stars in a Russian TV series called Doma-2) ignited the rumors when she leaked nude photos of Harington online and claimed that she and the actor slept together on multiple occasions both before and after his wedding to Leslie.

In the photos, Harington (or someone who looks like him) is asleep on a bed with a laptop computer next to him, ET Canada reports. Vlasova claims that she and Harington met in Luxembourg, where they hit it off and ended up beginning an affair.

Harington's reps have officially denied the reports. "The allegations in this story are completely false," the Game of Thrones actor's reps said in a statement to E! Online. "He's never even been to Luxembourg nor has he ever met Olga Vlasova."

It would admittedly be hard to believe that Harington cheated on Leslie at all, much less so soon into their marriage. The actor has gushed about his wife on multiple occasions. Speaking to Vogue Italia, he said:

"The three weeks in Iceland when we were shooting the second season. Because the country is beautiful, because the Northern Lights are magical, and because it was there that I fell in love. If you’re already attracted to someone, and then they play your love interest in the show, it’s becomes very easy to fall in love."

And, when asked about Game of Thrones' impact on his life after the Emmys this year, Harington said:

"I met my wife on this show, so, in that way it gave me my future family and life from here on in. That’s the main thing it did for me. It’s changed it completely. The last 10 years. You cannot ask for a better job to have in your twenties, to take you through your twenties than to be an actor in Game of Thrones. It’s been the most amazing thing. It’s changed it completely."

How has #GameOfThrones changed the lives of its cast? Kit Harington and Emilia Clarke respond backstage after drama win #Emmys https://t.co/M4CxOz8ehz pic.twitter.com/RkI9Xsseua

Here's hoping that these rumors are just that. 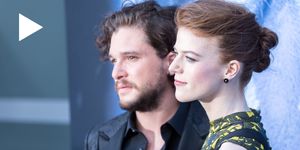 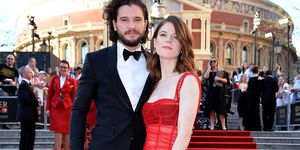 
Kayleigh Roberts Contributor Kayleigh Roberts is the weekend editor at Marie Claire, covering celebrity and entertainment news, from actual royals like Kate Middleton and Meghan Markle to Hollywood royalty, like Katie Holmes and Chrissy Teigen.
This content is created and maintained by a third party, and imported onto this page to help users provide their email addresses. You may be able to find more information about this and similar content at piano.io
Advertisement - Continue Reading Below
More From Celebrity
Prince William Statement on Prince Philip's Death
Meghan and Harry Are Facing Security Threats
Advertisement - Continue Reading Below
Selena Gomez Is Drenched in Fake Blood on Set
Amanda Seyfried Talked About Having Panic Attacks
Harry Arrives in the U.K. For Philip's Funeral
Matthew Perry Deletes 'Friends' Reunion Instagram
The Queen's Corgis Are Helping Her With Her Grief
Charles is Looking Forward to Seeing Harry Again
Will & Harry to Walk Together at Philip's Funeral
Beyoncé Wore Tweed Micro Shorts for Date Night