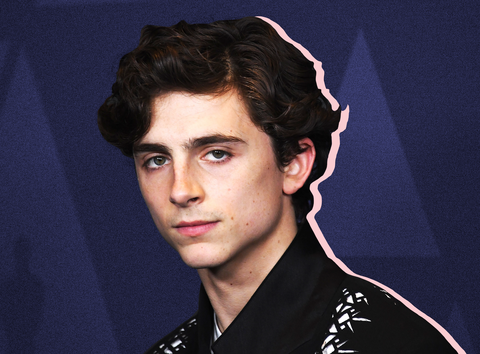 Hello, fruit doves, to welcome to another edition of This Week in Timothée Chalamet. And what a momentous week it was! I know I say that a lot and at a certain point people will stop believing me, but I really mean it! Like, so many Timmy things happened and I don’t even plan on writing about how he’s been all-but-confirmed for the cast of the upcoming Wes Anderson film The French Dispatch!

I could preface this more but, honestly, I want to just start talking about all the things.

Timmy got a Golden Globe nomination for Beautiful Boy!

Know what I mean?

He sat down with Emma Stone!

As promised, Timmy and Emma Stone sat down in conversation for Variety’s Actors on Actors. He opens by asking her about In Search of the Partridge Family, a reality show she appeared on more than a decade ago, and then talked about not loving Los Angeles because he wants to actually grow as a person (it's such a New Yorker response and I am very susceptible to it).

I love their chemistry despite the disappointing fact that they did not kiss, but I also think Emma Stone would have chemistry with literally anyone? For example, Timmy disclosed that he cried for "an hour" after his first viewing of Interstellar (one of his earliest roles) because his part in it was so small. Sorry to say it but this story is, um, not wildly becoming? At least he seems to laugh at himself for telling it, and Emma offers him a great, thoughtful out with, “Because it felt so big to you?” Damn, she’s very good.

The whole thing is surprisingly not-boring, even though the very title Actors on Actors forces me to suppress a reflexive jerk-off motion. Watch the whole thing here.

I regularly tell my boyfriend that our first child will be named Barbra if it’s a girl and Timmy if it’s a boy (I’m pretty sure guys love it when you talk about your future kids as early in the relationship as possible), and this week I got a glimpse into the future Drells because Barbra Streisand and Timmy Tim met IRL at the Amazon Christmas party!

I think Babs stans too, because she posted a pic of just the two of them to her Insta:

I. Am. Verklempt. This is my beautiful family. We are so happy, even though when I sent this pic to said boyfriend he told me to, "Drink some water, you'll be fine." (I will fight for full custody.)

Though he’s been uncharacteristically active on Instagram lately, TimCha hadn’t posted anything on Twitter since July. (Did we chronicle his last tweet all those months ago? Ha! Of course we did. I will never log off!!)

So what did he break his nearly 6-month silence to tweet about? A gif of an AOL Instant Messenger login screen, naturally!

I really...I really don’t know. But good to have you back, Tim.

And that’s all the news that’s fit to print. Have a great wéekend.