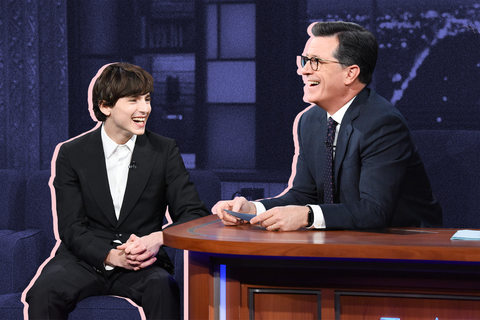 Hello, scarlet tanagers, and welcome back to another edition of This Week in Timothée Chalamet. Sorry for my absence last week, I was up in Maine for the Thanksgiving holiday and needed to take a short break. The good news is that with two weeks of Timmy content piling up, the following will be pretty discerning! I missed you, though. And Timmy, of course.

So where was he? What did he do? Who did he meet? Oh, I have the answers.

Timmy got profiled for Deadline!

There’s a feature about Timmy in Deadline this week, and writer Joe Utichi spoke not only to the beautiful boy himself but also to Nic Sheff, Luca Guadagnino, and Armie Hammer! Though a good primer, there admittedly aren’t a ton of revelations for stans like us (What’s that? Timmy is a talented young man? Where have I heard that before besides literally every week at the top of this column?) but it’s filled with a lot of justification for being a fan so I will take it! Also apparently Timmy loves Edie Falco, which shows good common sense in my opinion.

There was one thing that was fascinating, not really about Timmy but from him. Since Greta Gerwig’s Little Women adaptation is the only thing I like now (12 more months!) this tidbit is pretty interesting:

He had never read Little Women before the job came along. “A lot of guys aren’t aware of the importance of it, and how impactful it was,” he says. But he’s put the work into getting up to speed, and can speak with confidence now. “A lot of Louisa May Alcott’s male friends claimed to be the Laurie that the book was based on—I think there’s evidence that it was one person, and that a lot of people were wrong in the assumption that it was them.”

I did not know that! Who is the real Laurie, O.G. literary fuccboi?!

Regardless, I’m really digging Timothée Chalamet: Nineteenth Century American Novel Scholar. This is a look that he can pull off.

God, this feels like it happened a quarter-century ago, but we should talk about it. On November 16, Timmy went on Colbert. Though he’s been on Fallon thrice, this was his first time fielding the slightly tougher interview technique of Colbert. And he did fine! His hair looked bowlier than usual, which I have already said I am comfortable with, and he has never been that comfortable-looking during televised interviews. It’s part of his humble charm!

— “I’d rather get [peaches from fans] than have no career at all.”

— “I was on this TV show Homeland and somebody came up to me on the street and said, ‘I really hope there are some more shots of your feet this season.’”

— “It seems like you guys are in love.” Re: Steve Carrell and Colbert.

I am always present and accepting of more “Steve Carrell is a hot dad” content. Just putting it out there.

Ava DuVernay was impressed with Timmy!

Visionary director who should be in charge of the new Dune, to be honest, Ava DuVernay, had the immense pleasure of meeting Timmy at an event and was so impressed she tweeted about the experience:

I like this person. Smart and kind and curious and really cares about this world of ours. Approaches so sweetly when I see him. And leaves me with a smile. Hugs to you, @RealChalamet. pic.twitter.com/Kqyls3SAlb

Timmy was stuck in an airport!

Holiday travel, am I right? Our man has been quite the jet-setter recently—Budapest, Boston, Los Angeles, New York, back to Boston, it’s not weird that I listed those from memory—and posted a few Instagram stories of various long lines at airports. Plus, this Insta pic of an exhausting scene:

If I was there I'd be all, "Timmy, feel free to rest your head upon my JanSport backpack as we await our flights."

Timmy’s got the best haircut for women this season!

According to a few articles, Timmy’s coif is the lewk du jour for women this winter. The Cut interviewed three women on what it was like to get Timmy-inspired ‘dos (verdict: freeing!), The Guardian did a helpful explainer on why The Chalamet works for everyone, and Refinery29 did a lovely story on the firsthand process of picking a Timmy hairstyle.

But, of course, my favorite bit of Timmy hair content will always be from our friend @TimmyIllustrated:

Tag yourself, I'm @tchalamet with a bowl cut

IDK, I think I could pull off the Beautiful Boy? Don't tell me if I can't.

And that’s the news! Have a wonderful wéekend.