Notoriously private celeb Anne Hathaway has been openly discussing her decision to stop drinking—for the next 18 years, at least. Appearing on The Ellen DeGeneres Show to chat about her new movie, Serenity, the 36-year-old actress revealed that she’s vowed to go teetotal for the foreseeable future, in order to make sure that she can keep up with the demands of her son. Turns out, according to Anne, parenting and hangovers aren’t a great combination.

The Oscar winner, who gave birth to her first child Jonathan with husband Adam Schulman in 2016, told Ellen that one early morning start in particular was enough to seal the deal for her.

“I quit drinking back in October, for 18 years,” Hathaway revealed. “I’m going to stop drinking while my son is in my house just because I don’t totally love the way I do it, and he's getting to an age where he really does need me all the time in the mornings. I did one school run one day where I dropped him off at school, I wasn’t driving, but I was hungover and that was enough for me. I didn't love that one.”

As well as the school run, her Serenity co-star Matthew McConaughey also played a guilty part in her self-imposed drinking ban. "We drank the night away, and then I had to go to a meeting with Steven Knight, our director, the next day, and I was just kinda—have you guys ever had to go to a meeting hungover?" she asked the audience.

"I was just kinda stumbling in with one eye open and I was trying to convince him about certain things about my character,” Hathaway recalled. "And at the end of it I said, 'Listen, I have a confession. I was hungover the entire time.' And he just goes, "Oh, really? I couldn't tell’. Then two days later we had another meeting and I showed up and he said, 'Oh, now I can tell.'"

We've all been there. Not necessarily as a result of a party with McConaughey, but still, definitely been there. 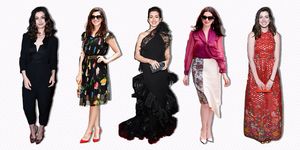 Anne Hathaway Is the Only Celeb to Take This Risk

Lucy Wood Contributor Lucy Wood spends most of her time writing about celebby things, reading books, and waiting for the glorious day that she have enough millions for a pet sloth.
This content is created and maintained by a third party, and imported onto this page to help users provide their email addresses. You may be able to find more information about this and similar content at piano.io
Advertisement - Continue Reading Below
More From Celebrity
How Celebrities and Friends Are Supporting Meghan
Meghan Didn't Need Prince Harry to Be Wealthy
Advertisement - Continue Reading Below
Pregnant Emma Stone Runs Errands in Santa Monica
The Queen Reportedly Got Two New Corgi Puppies
Meghan in New Clip: Royal Family Is "Different"
Gwen Stefani Is Unrecognizable In New Insta Post
Lady Gaga Wore Serious Platform Heels in Rome
North West's Pet Lizard Has Its Own SKIMS
Is Harry & Meghan's Archewell Update a Royal Diss?
Why Is the Royal Family Called "The Firm?"