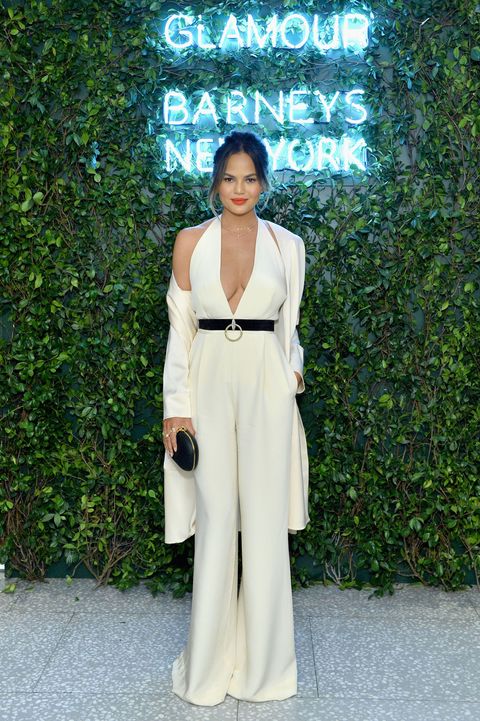 As previously demonstrated, Chrissy Teigen has zero time for your nonsense. Question her fertility choices? Sit down. Rooting for her marriage to fail? GTFO. Today, she's taking on conservative TV network Fox News.

Like many other celebrities and civilians alike, Teigen was annoyed by the news over the weekend that United Airlines barred two teenage girls and one child from wearing leggings on a flight. The incident was first reported by an observant Twitter user over the weekend. The ensuing outrage decried the policing of young, female bodies as well as the inconsistent standards of airline dress codes. Teigen took that approach:

I have flown united before with literally no pants on. Just a top as a dress. Next time I will wear only jeans and a scarf.

Fox News created a graphic to illustrate her tweet and tagged her in it, which Teigen was not happy about. She replied to let them know.

I respectfully ask you please don't ever tag me in anything, ever. Words cannot explain how much I detest you.

This response, of course, riled up the alt-right trolls who were annoyed by her perceived special snowflake attitude. Teigen has so far been dealing with them in the simplest way: retweeting their hateful words with no commentary, letting the nastiness of the user be its own insult.

Oh get a grip, Chrissy. You detest the truth? How many immigrants live in your houses? How many do you support? Joke

Oh noooo!! The airline has rules and they are following through with them!! How dare they!!! You're a cry baby! 😭😭

Kaitlin Menza Kaitlin Menza is a freelance features writer.
Advertisement - Continue Reading Below
More From Celebrity
47 Really and Truly Adorable Celebrity PDA Moments
Dakota Johnson Rocks Gucci Suit in Milan
Advertisement - Continue Reading Below
The Cast & Director of 'Cruel Intentions' Reunite
Prince Harry Spotted on a Grocery Run in Canada
Kanye West Leaves Kim Kardashian in an Elevator
Channing Tatum Is "Happy" for Jenna Dewan
Inside Chrissy Teigen and John Legend’s Home
A Look at Royal Family Portraits Through the Years
Are The Weeknd's 'After Hours' Lyrics About Bella?
Kendall and Harry Had a Moment At the Brit Awards