Game of Thrones' final season is officially underway, and fans are grasping at any and all clues for the ultimate, George R.R. Martin-approved ending. We're all asking: Who will end up on the Iron Throne?? Luckily for us, Kyle Thomas, astrologer for Love By Luna, matched the characters to their astrological sign, which might help you figure it out.

Not only do the below insights tell you which character you match up to (I'm Arya, which makes me happy), but it might help you decide which character will inevitably triumph over the others—for the ultimate GoT win.

"With a fiery temperament and intense drive for conquest, Daenerys possesses the heart and vision of an Aries. Just as she is hungry for power and will lead an army to do so, so do Aries on the battlefield of life. She has a vision for the future and is entirely self-confident, ready to be the spark that ignites the future. Also, she always goes after what she wants."

That seems super-promising, to me. Of all the characters, she's probably the most balanced and level-headed, while still being incredibly motivated for power. But the whole "my lover/nephew has a better claim than me" thing is going to be a big problem for her, given her singleminded focus, and her balanced nature may not triumph over her burning-people tendencies.

"With a deep loyalty to who and what he loves, Jaime is an iconic Taurus. His stubbornness to be true to his word is also symbolic of this earthy sign, and his intellect, charm, and strategy help assure that whatever side he is on will likely go the long haul to victory. Jamie has enduring power, which is Taurus’s greatest gift. Also, he is so often motivated by love, which is another token of this most romantic sign."

I love the romanticism of being motivated by love, but I think that's going to be a problem for Jaime in coming episodes—plus, the Lannister house (aside from Cersei) isn't looking so hot right now.

"With a chameleon ability to wear 'many faces,' Arya is the quintessential Gemini. With versatility and flexibility, as well as a logical approach to getting what she wants, Arya knows how to play the game and use her mind, actions, and words flawlessly. Also, having trained her skills throughout the series, this is yet another connection to Gemini, as this is a sign of talent and development."

Arya's a completely badass warrior with a surprisingly pure heart (think back to her "list" of enemies that hurt her and her family), but that's her identity—a warrior. She doesn't have the political know-how to maneuver her way to the throne, but she could totally support a sibling who might...

"With a deep loyalty to family and his “chosen family,” Jon Snow possesses many qualities of Cancer. With a sensitive heart that he tries to mask in order to receive respect from those around him, Jon is one of the greatest heroes of the series. He is also rather moody at times, another Cancerian trait. No matter what, though, you can always assume Jon will lead with integrity."

Honestly, considering what he's up against—personalities that are much stronger and, in the case of Cersei and the Night Kind, a lot more evil—I can't see him ascending the Iron Throne alone with this horoscope.

"With a heart of gold, ferocious strength, and desire to defend those she loves, Brienne takes great pride in her path as a knight. Despite not always having confidence, she has grown to value her abilities and has won respect from those around her. Also, with courage and honor being integral to her character, she easily embodies the fire of a Leo."

I see Brienne being a strong ally in the war to come, plus a super-loyal advocate to the people she loves (Jaime), but not a ruler.

"Detail and service oriented, Samwell is definitely related to the zodiac sign of Virgo. Virgo is known for their intellect, organization, and strong ability to get things done, which Samwell has done throughout the epic fantasy series. With such a vast knowledge, he is definitely a man of skill and a force to be reckoned with."

I mean, did we really think Sam was going to rule? Hilariously, one of the HBO character posters had him on there, but I can't see it.

"Known for her able to strategically move in and out of the games of politics, Sansa has grown a great deal season after season. Her grace and elegance have never faltered, and her ability to outwit and outmaneuver others is a gift due to her inherent understanding of people and what they want. Able to be the image of what others need, she has shown adaptability and balance just like a Libra."

To be quite honest with you, Sansa has been a bit of a killjoy thus far this season, but I actually think it's a sign she's taken on the craftiness of Littlefinger and some of the potential ruthlessness of former husband Ramsay Bolton. Just as Jon ceded power to Sansa when he left Winterfell, I can see her taking on responsibility (and power) where others might balk at the prospect. I know this is projecting BIGTIME, but I feel like the Stark children, together, have the combined skills they need to ascend the throne.

"Hungry for power, control, and a master of strategy, Cersei harnesses the magnetic and foreboding power of a Scorpio. While she is not inherently evil, she has fought throughout her life to get respect despite constantly being pushed down. This only makes a Scorpio’s vengeance and fury greater, which they will unleash like wildfire when the time has come."

I know this initially sounds really intimidating, but I think Cersei's purely selfish motives are going to come back to haunt her—the fewer friends you have, the fewer options you can tap into when the big battles come. Plus, she thinks she's better than everyone else, which bodes badly for a sneak attack (Arya's new weapon?).

"As a sign that craves adventure and has a fiery stubborn streak, Sagittarius are represented by Tormund. Also, as a free folk, he does not like being locked down and limited as he enjoys his freedom. These, too, are significant traits connected to this expansive Fire Sign. Last, with a feisty temperament, he will charge on into new experiences and is even open to changing his mind as he grows."

I love love love Tormund with all my heart, but good-hearted, independent characters don't seem to do very well on this show.

"Symbolized by the mighty and powerful Night King, Capricorn are ambitious and eager to rise above others. Just like the White Walkers, Capricorns can be cold to the point of iciness. However, this does not make them evil as some may see the Night King: they just value their vision and conquest as essential to their long-term growth. The Night King will stop at nothing to get what he wants, even if it is a slow and continuous grind to get it."

Ugh, this is a very good horoscope, so I have a feeling that the battle with the Big Bad of the final season is going to lead to a lot of main character deaths.

"Bran’s progress as a character has always been a mystical one throughout the series, as he possesses unique abilities to see far ahead into the future. However, because of his emotional detachment and connection to what is still to come, he is representative of Aquarius. Aquarians are known for their perceptive skills, yet logical demeanor, and this is what sets them apart from the others."

Bran has been so so creepy this season so far. Like, can't he just tell people how the battle shakes out? I know, I know, free will, choosing your own destiny, you wouldn't go into battle if you knew you were going to die, don't mess with time travel, etc., but the addition of this character is leading to a lot of plot problems. I can totally see him surviving, but serving as an ally, not a political force—good thing he's a Stark, then. Plus, being the Three-Eyed Raven looks like it's totally cooked his brain, in a bad way.

"Ethereal, mystical, and connected to other realms, Pisces are embodied within the character of Melisandre. Throughout the series, she has revealed unique and supernatural powers, and as a woman of deep age, this, too, connects them to Pisces. Pisces are the final sign of the zodiac, and despite having an eternal joy and youth, they also possess a deep wisdom about life and humanity. Magic flows through their bones."

Considering that Melisandre told Varys that they were both destined to die in Westeros, I think the old witch's time has come, but not before she has an important part to play in the big battles this season.

So, there you have it. Looking at their horoscopes, I think the Stark children combined, with Jon's lineage at the center and Sansa, Arya, and Bran rallying around, have the best chance to "win" Game of Thrones. Sorry, Dany. 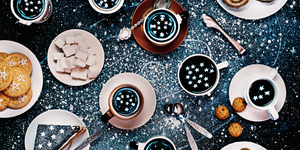