Last night, John Legend turned from judge on The Voice to judge AND performer on The Voice, taking the stage to perform his new single, "Preach." Chrissy Teigen, ever the devoted wife and mom, posted video of her and their daughter Luna Legend dancing along supportively as John absolutely killed it live. And the video, surprising absolutely no one, is the cutest.

Chrissy initially tweeted jokingly that she wasn't "cool" enough to get in to see her own husband perform live on stage: "I just tried to call from outside the door and was declined can you tell him I was just trying to say hello[?]" But then we got a sweet shot from inside the Teigen household. Chrissy had John singing live pulled up on the computer, and both she and Luna swayed along as John finished the song. Luna, in a very fetch Moana tunic/pj set/dress, chattered along and pointed at her dad excitedly.

I loooove it. If we can't get a shot of Chrissy dancing dorkily in the audience, a special home performance (with an audience of two) is a close second.

Here's Chrissy joking about her lack of access to her own husband:

And here's the dance video:

Considering that Luna is already learning how to sing just like her dad, he's giving her a great example of what a future career would look like. Luna Legend: famous singer. I am HERE for it. 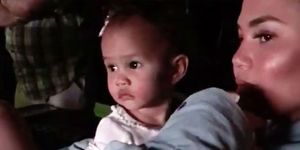