Spoiler alert for the Game of Thrones premiere: Ever since Game of Thrones had its last premiere this past Sunday (me: takes a moment, cries a little, comes back), fans have been absolutely poring over every single screengrab of the episode to spot clues for the ending. And some fans are absolutely convinced that they've figured out a huge plot point: Namely, that the Night King is a Targaryen. Uh oh.

So, the reason why this new theory is relevant, beyond giving us more insight into the blue-eyed creep that is season 8's Big Bad, is that it's believed that Jon/Aegon and Dany have claims to the throne because they are Targaryens. Thus, the Night King would also have a claim to the throne, and presumably a really good one, considering he's much, much older than Jon or Dany. Also, only Targaryens can ride dragons, and there's footage the Night King riding the reanimated dragon Viserion. Gulp.

D. B. Weiss, one of the creators, did hint at the Night King's motives not being purely evil and that their motives might stem from a huge grudge, which kind of fits in with the theory of the Night King being a former Targaryen that's coming back to reclaim what he believes to be his:

We always liked the implication that they weren't some kind of cosmic evil that had been around since the beginning to time but that the White Walkers had a history—that something that seems legendary and mythological and permanent wasn't. They had a historical cause that was comprehensible like the way the wars on screen we're seeing unfold are comprehensible. They're the result of people, or beings, with motivations we can understand.

Other fans were quick to point out that we did in fact see the human person who was turned into the Night King centuries before the events of the show, and he did not have the trademark silver hair of a Targaryen—plus, he was created before any of the houses existed. However, that doesn't mean that the human doesn't have the same lineage as what became the Targaryens, just that it was before that recorded history.

Here's some of the best fan reactions:

I’m convinced the night king is a Targaryen and he is coming to claim the throne. Only a Targaryen can ride a dragon #GameofThones pic.twitter.com/iUOmc6QiKS

Aren’t we going to talk about this.
Was the Night King a Targaryen ?#GameofThrones pic.twitter.com/h4CNht3xoX

Am I tripping or does the Night King’s pattern resemble the Targaryen house sigel? #GOT #DemThrones pic.twitter.com/kUDSSDnrRi

I swear, if the Night King ends up on the Iron Throne, I'm just going to stop watching right now. (No, I won't. Who am I kidding? But I AM going to be upset.) 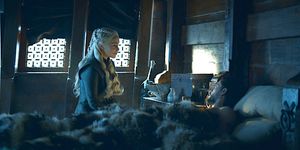