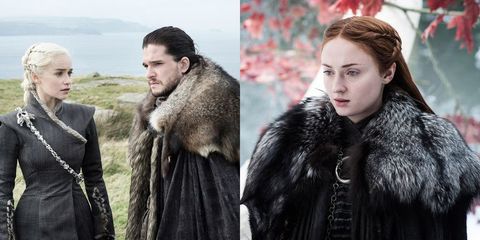 The final season of Game of Thrones is coming and, like winter in Westeros, it's taking FOR-EVER. If you're the kind of Thrones fan who lives on a scant diet of spoilers between seasons, then keep reading for a few tasty morsels about Season 8 below. If you're the kind of fan who plugs your ears and hums at the very mention of Game of Thrones in your dedication to avoid spoilers, then take your fingers out of your ears and use them to click away now because there are some mild Season 8 spoilers below.

The newest GoT details come courtesy of Entertainment Weekly, which ran a lengthy cover story on the highly-anticipated final season this month. The feature included plenty of Thrones details for fans. Here are some of the most revealing:

Season 8 will begin at Winterfell:

"Season 8 opens at Winterfell with an episode that contains plenty of callbacks to the show’s pilot. Instead of King Robert’s procession arriving, it’s Daenerys and her army. What follows is a thrilling and tense intermingling of characters—some of whom have never previously met, many who have messy histories—as they all prepare to face the inevitable invasion of the Army of the Dead."

The EW piece doesn't explicitly go into the first meetings, but some of the characters who have never met who will finally come face-to-face in the Season 8 premiere include Daenerys and Sansa (epic because they're both epic), Daenerys and Arya (epic because they're both kind of crazy and violent), and Daenerys and Bran (epic because he knows she and Jon are related, which is awkward because, well, you know). Sir Jorah "Friendzone" Mormont will meet badass 10-year-old Lyanna Mormont, the new head of his house who might accept him back into the family after years of banishment.

There will also be some amazing reunions, like Arya and The Hound, who spent a season walking across Westeros together like the most unlikely buddy cop duo ever and didn't part on the best of terms (Arya left him for dead, refusing to put him out of his misery after his ill-fated fight with Brienne of Tarth). Sansa will also reunite with Tyrion, who was (is? How does divorce and annulment work in Westeros?) her husband.

The point is, we have so many delightfully awkward encounters to look forward to and that's just in the premiere.

At least not right away. According to EW, "Sansa isn’t thrilled that Jon bent the knee to his fancy new Targaryen girlfriend, at least not at first."

Here's Sansa's "Um, what?" look at Daenerys in GIF form:

When you bring your new girlfriend home to meet the family but your half-sister-cousin ain't having it. #GameofThrones #Season8 pic.twitter.com/tfkeDyZFOv

The battle scenes with the Army of the Dead will be a WHOLE THING:

They were certainly a whole thing to film. According to the EW story, the battle scene took 55 nights of outdoor shooting to film and then more filming was done in the studio afterwards.

"It’s brutal," Peter Dinklage, who plays Tyrion Lannister, said. "It makes the Battle of the Bastards look like a theme park."

The final season will be "bittersweet":

We all know this is code for "emotionally devastating, but narratively satisfying."

"It’s about all of these disparate characters coming together to face a common enemy, dealing with their own past, and defining the person they want to be in the face of certain death," co-executive producer Bryan Cogman told EW. "It’s an incredibly emotional, haunting, bittersweet final season, and I think it honors very much what George set out to do—which is flipping this kind of story on its head."