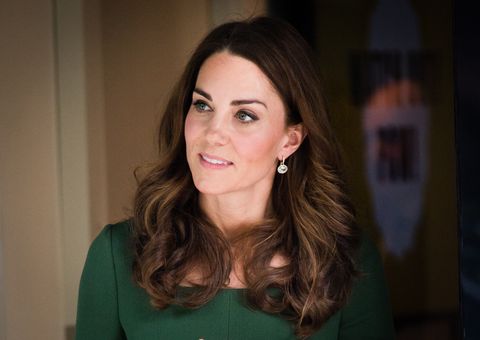 Kate and Harry went to school together at Marlborough College and, apparently, she was still pretty hung up on him after graduation and spent a lot of time talking about him to girlfriends during the early part of her gap year, when she was studying in Italy.

In her book Kate: The Future Queen, royal expert and biographer Katie Nicholl, spoke to a friend of Kate's from the time who spilled the quasi-embarrassing details about the Duchess' first big heartbreak and hangup. According to Nicholl, Kate lived with three roommates at the time and was constantly talking about Harry and her heartbreak.

"When Kate arrived, she was really hung up about this boy from Marlborough called Harry," a friend of Kate's told Nicholl for the biography. "She spoke about him all the time. I think he might have broken her heart slightly. He seemed to have blown hot and cold with her when they were at school, and she was always talking about how she could get him back. He was the only boy she talked about, and I don't even think it was that serious."

Of course, Kate did eventually move on in a big way, clearly.

Related Stories
Will and Kate's Principal Predicted Their Love
That Time Kate and Will Played 'Never Have I Ever'
Kayleigh Roberts Contributor Kayleigh Roberts is the weekend editor at Marie Claire, covering celebrity and entertainment news, from actual royals like Kate Middleton and Meghan Markle to Hollywood royalty, like Katie Holmes and Chrissy Teigen.
This content is created and maintained by a third party, and imported onto this page to help users provide their email addresses. You may be able to find more information about this and similar content at piano.io
Advertisement - Continue Reading Below
More From The Ultimate Guide to the Royal Family
46 Moments That Changed the Royal Family Forever
A Look at Royal Family Portraits Through the Years
Advertisement - Continue Reading Below
A Look Back at Princess Anne's Life in Photos
Charlotte Looks Like the Queen and Prince William
Charles Shared a Rare Childhood Pic with Philip
Charlotte Looks So Grown Up in Her Birthday Pics
Harry's Next Trip to the U.K. Is in Serious Doubt
Prince Charles Has *Not* Forgiven Prince Harry
See New William and Kate 10th Anniversary Photos
30 Surprising Royal Pregnancy Traditions