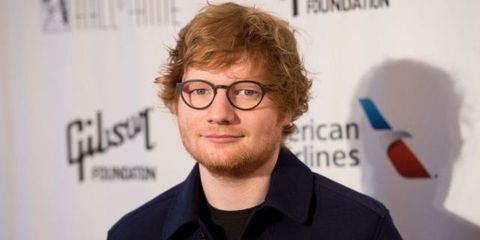 So it's a matter of some intrigue to hear that Ed Sheeran's rather modest dressing room demands have been leaked ahead of his headline performance at Glastonbury 2017, arguably the biggest gig in Britain. According to the NME, Ed's rider is: a bottle of Robinsons Squash, a six-pack of Coca-Cola, a six-pack of Diet Coke, a six-pack of Fanta Orange, a six-pack of Sprite, and a jar of Manuka Honey.

The total bill for the list comes to £57.31, the bulk of which went to the honey, which presumably is to help soothe his voice.

Not even any booze here, and as we all know, Ed loves a drink.

Further evidence Ed is a nice, normal, down-to-earth bloke or that rock 'n' roll is well and truly dead? We'll let you decide.

Ed first broke the exciting news that he would be headlining Glastonbury back in March on his Instagram.

This content is created and maintained by a third party, and imported onto this page to help users provide their email addresses. You may be able to find more information about this and similar content at piano.io
Advertisement - Continue Reading Below
More From Celebrity
William Reveals Which of His Kids Is the Cheekiest
Serena Williams's Daughter Is Taking After Mom
Advertisement - Continue Reading Below
EmRata Opts for Faux Fur and Yeezy Boots
Rob Lowe: Prince Harry Is Rocking a Ponytail Now
Rihanna Stuns in $2 Million of Diamonds and Rubies
Fans Think Zayn Just Hinted at Proposing to Gigi
Ben Affleck Said J.Lo Faced "Sexist, Racist" Media
Kate & William Might Get Vaccinated on Camera
40 Rare Photos of Grace Kelly Through the Years
The Best TV and Movie Wedding Dresses of All Time