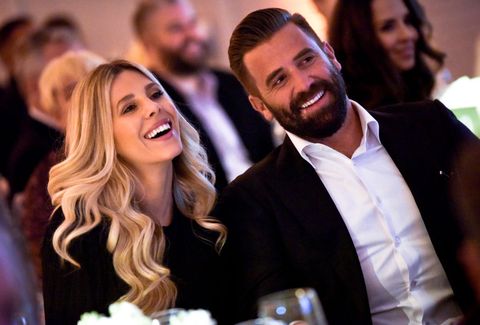 Jason Wahler was a notorious party boy and paramour of Lauren Conrad in the original iteration of The Hills. But as with many of the co-stars on the show, things have seriously changed: Wahler is now a family man who’s been married for nearly half a decade to Ashley Wahler (née Slack).

Though Ashley wasn’t around for the original, she’ll be part of the cast for The Hills: New Beginnings, premiering this month on MTV.

So who is the woman who stole Jason’s heart? And what can we expect from her turn on the new show?

Here’s what we know:

Jason Wahler told Us back in 2013, after they got engaged, that he met Slack through friends, and knew she was the one pretty quickly. He said, "I found someone I really genuinely care about as a friend...My parents have been together 40 years, they just celebrated that. They're best friends deep down. That's kind of what you have to find."

He also told the magazine that he planned to start a family “within the next five to seven years.”

She’s a stylist and self-described foodie.

Ashley is a stylist and hair colorist who works at a salon in Newport Beach. She even has an Instagram dedicated to her creations:

For awhile she had a blog called Lilah & Lou, named for her daughter and her dog (respectively) but it looks like it hasn’t been updated for awhile. There, she posted recipes she likes (she calls herself a foodie on her IG!), stories about her family, and personal anecdotes.

She loves being a mom.

Jason and Ashley have a daughter, Delilah Ray, together. They also have a dog, King Louis, who Ashley jokingly calls her “first-born.” Delilah (who the couple calls “Lilah” for short) was born on August 21, 2017—a month after both Lauren Conrad and Whitney Port had their own children, according to People.

And, as expected, she’s super cute:

Happy 11 months baby girl! . . . You have the best personality and your squinty smile lights up any room! Mommy and daddy love you so much!!! . . . #lilahandlou #delilahray #family #baby #11months #stopgrowing #mommyblogger #lifestyleblogger

Happy Valentine’s Day to the two most precious people in my life! I love you both so much!

Both Ashley and Jason are open about their sobriety journey together.

Jason Wahler has been vocal about his very public battle with alcohol addiction, and even appeared on Celebrity Rehab With Dr. Drew. He is a public speaker on his experiences and co-founded the sober-living resource center Widespread Recovery.

And, because alcoholism affects those around the sufferer as well, Ashley has been open about the toll it took on their marriage. In April, she said on Instagram that she was celebrating a year in Al-Anon, which is a resource for people “worried about someone with a drinking problem.”

A year ago today I walked into Alanon broken, a shell of a person, unrecognizable and extremely mentally sick. I was unhappy in my marriage and had just had a baby! The affects of the disease of alcoholism had me in the darkest place I had ever been in my life! I walked into those rooms ready to surrender and do anything I could to be happy and healthy again! I got a sponsor began to work the steps and today I celebrate 1 year! I have never been happier in my marriage or in my life! Today I am so proud of the progress but not perfection I have achieved! God is so good and self care is so important!!!! Happy Alanon Birthday to me!!!! #selfcare #recoveryispossible #bettertogether #happiness #mentalhealthawareness

It’s clear that they want to use their experiences to educate others about addiction.

It’ll be interesting to see what kind of role she fills on the show, since she seems like a really kind, open mom who’s experienced her fair share of struggles. We’re rooting for her!