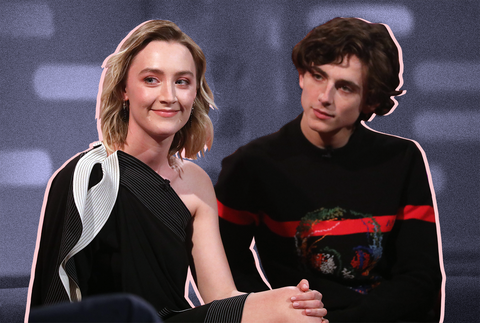 Because being a person in the world is hard and you deserve something nice, this is MarieClaire.com's regular column on everything talented young man Timothée Chalamet did that week. You can catch up on last week's here.

Hello, northern parulas, and welcome back to another edition of this week in Timothée Chalamet. Happy summer solstice! I do hope you charge your crystals and commune with nature and enjoy the longest day of the year.

Speaking of nature, a cool thing I learned (courtesy of reader Jill) is that the northern parula is called the “yellow backpack bird” by her birder friend, and she thought it was particularly fitting for Chalastans because of the iconic yellow backpack that Timmy wears in Call Me By Your Name. I would also argue that the yellow-rumped warbler is quite backpack-wearing, though this is the first time I have ever thought of it in these terms and I am better for it. Thank you, Jill!

Here’s what élse is going on:

Obviously you already know that the first official photos from Greta Gerwig’s Little Women were released this week. And you likely also already know (or at least assumed) that I passed out a little when I saw the one of Timmy corseting up Florence Pugh. Let’s unpack these images, yes?

Vanity Fair posted the exclusive, which I am slightly offended by because Greta Gerwig and I went to the same high school and I just feel like maybe she should have considered giving me the exclusive even though I’m pretty sure she has literally no say in how that works but I just feel that being an alumna of St. Francis Catholic High School for Girls should count for something besides eight semesters of theology classes and the residual guilt of abstinence-only education?

Here are the highlights, to me:

The March sisters are back! Get an exclusive first look at Greta Gerwig's #LittleWomenMovie https://t.co/Rkc5Sawg3O pic.twitter.com/JhQKMts42L

my pride look this year is anything timothée chalamet is wearing in little women https://t.co/nMkaF4DBLG pic.twitter.com/t5pEGWVpZB

“Jo is a girl with a boy’s name, Laurie is a boy with a girl’s name,” Gerwig pointed out. “In some ways they are each other’s twins.” A subtle connection between the two in the film is their wardrobe; [costume designer Jacqueline] Durran had them swap articles of clothing throughout the story.

“They find each other before they’ve committed to a gender,” Gerwig adds. “It wouldn’t be wrong to call Saoirse handsome and Timothée beautiful. Both have a slightly androgynous quality that makes them perfect for these characters.”

FETCH ME MY INHALER I HAVE NO BREATH https://t.co/sY0PsY4fXs

If the point of art is to both entertain and inspire, this movie is already the most art thing I have ever had the pleasure of knowing about because as horrific as this year may be in some ways, it is also the year that Little Women will come out. I can hold on!

What more news do you need? However, if you have anything you want to share—tips, fan art, suggestions for the column—I encourage you to email me at Timmy@MarieClaire.com.

Oh, and have a beautiful wéekend.