John Stamos, like the rest of us, is not about to let Full House go. Fuller House, the show's sequel, is gearing up for its fifth and last season, which will air at the end of the year. But Stamos, who both stars in and executive produces the sequel, thinks there's one more pre-Full House storyline to delve into: the period before Pam's death. In other words, Stamos is thinking about a prequel.

First, let's get our (full) houses in order: Full House, which aired between 1987 and 1995, centered on Bob Saget's Danny Tanner raising his three children (D.J., Stephanie, and Michelle) after the death of his wife, Pam. To do so, he recruits his brother-in-law, Jesse Katsopolis (Stamos) and his best friend, Joey Gladstone (Dave Coulier).

Earlier this week, Stamos told Entertainment Tonight that there's "a lot of energy still" surrounding the Full House world. "There's too much happiness that that show has brought for a lot of people. So it's not going to go down easy," he said.

Yesterday, he expanded on his ideas while speaking to E! News. "I don't think it's done either," he said. "I think there's a play that we go backward, like what happened before?"

"If you remember in the pilot of the show, my sister Pam dies, and that's why it's the three men raising the three girls, so I'd like to explore that—the brother/sister, maybe go back. We'll see," he said.

Logistically, a prequel might be difficult — presumably none of the original cast could return, unless some highly advanced age-rewinding CGI comes into play. But, like Stamos said, the show would hardly struggle to find an audience. 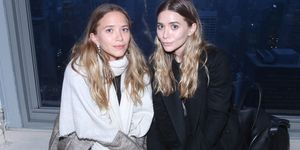 Why Mary-Kate and Ashley Didn't Do 'Fuller House'
John Stamos Is a Jo Bro Stan
Emily Dixon Emily Dixon is a British journalist who’s contributed to CNN, Teen Vogue, Time, Glamour, The Guardian, Wonderland, The Big Roundtable, Bust, and more, on everything from mental health to fashion to political activism to feminist zine collectives.
This content is created and maintained by a third party, and imported onto this page to help users provide their email addresses. You may be able to find more information about this and similar content at piano.io
Advertisement - Continue Reading Below
More From Celebrity
Olympia Wore a Mini Version of Serena's Unitard
Meghan's Mom Doria Ragland Is Helping the Sussexes
Advertisement - Continue Reading Below
Gigi and Baby Khai Twin in Matching Swimsuits
Diana Rewore this Dress for the Sweetest Reason
Sussexes Did Consult Queen on Using Name Lilibet
The Queen Commemorated Philip's 100th Birthday
Jennifer Lopez Is Considering a Move to L.A.
Katie Congratulated Ex Emilio on Instagram
What Happens on Katie's Season?
Jennifer Lopez and Ben Affleck: Everything We Know