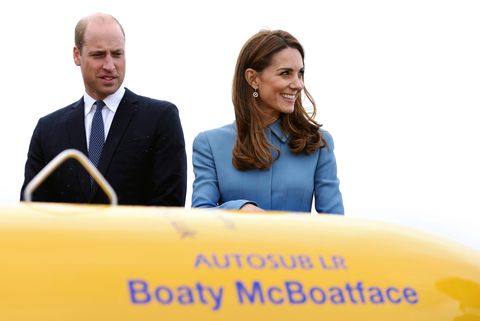 When the U.K.’s Natural Environment Research Council held an online poll to name a research ship in 2016, they may have expected the public to settle on something profound or respectable or at least normal.

But, because the internet exists, none of those things happened. Instead, thanks to a wonderful suggestion from a radio presenter, the public voted in "Boaty McBoatface" as the name of the research ship.

You know, as you do.

Although Boaty McBoatface had a solid run, this year, the ship was renamed the RRS Sir David Attenborough, in honor of the noted conservationist and naturalist.

Among those present at the official naming ceremony in Birkenhead, England this week were Prince William and Kate Middleton, who took active roles in the event. Kate helped with the tradition of smashing a Champagne bottle on the ship's hull, and Will was taksed with introducing Attenborough, who also (naturally) appeared at the event.

In true millennial royal fashion, Will did not let the moment go by without a nod to the ship's original, internet-y name.

"As last week’s climate protests the world over, and yesterday’s report on our oceans and frozen regions demonstrated, there has never been a more important moment for this ship to get to work. It is my immense privilege and relief to welcome Sir David Attenborough, rather than Boaty McBoatface, to speak," he said, according to Reuters.

A literal royal just said "Boaty McBoatface" during an official speech at an official royal engagement, so I can probably die happy now.

Related Stories
Kate Middleton's Most Expensive Outfits of 2017
Prince William Says He and Kate Are "Naughty"
Kayleigh Roberts Contributor Kayleigh Roberts is the weekend editor at Marie Claire, covering celebrity and entertainment news, from actual royals like Kate Middleton and Meghan Markle to Hollywood royalty, like Katie Holmes and Chrissy Teigen.
This content is created and maintained by a third party, and imported onto this page to help users provide their email addresses. You may be able to find more information about this and similar content at piano.io
Advertisement - Continue Reading Below
More From The Ultimate Guide to the Royal Family
Will & Kate Are Nervous About George's Future
George Won't Be Forced to Go to Boarding School
Advertisement - Continue Reading Below
A Slice of Diana's Actual Wedding Cake Is For Sale
This Old Video of the Queen Saying "Nah" Is LOL
Diana Had a Secret Message on Her Wedding Shoes
Will's Friends Made "Jibes" About Kate's Mom
William Will Suffer "Worst" from Harry's Memoir
Harry's Friends Don't Want to Be in His Memoir
Will & Kate's Modern Approach to Raising George
Why Harry's Memoir Release Date Has Upset People