Brace yourselves, Kardashian fans: A new trailer for the rest of Keeping Up With the Kardashians season 17 has dropped, and it looks like things are about to get extremely brutal. In fact, we could be teetering dangerously close to losing Kourtney from the show altogether. In the trailer, Khloé asks her, "You would be happy if the show ended?" And Kourtney's nonchalant reply? "Yeah, who cares?"

What's more, the trailer suggests the Kourtney-Kim feud is only going to get worse, as Hollywood Life reports. Even Kris Jenner is compelled to step in. "I feel like the really funny side of you guys outweighed the mean side," she tells her daughters. "And I feel like it’s gotten a little Mean Girls. As much as I love you, you fight a lot dirtier than you used to fight."

This isn't the first time Kourtney's suggested she'd like to leave Keeping Up with the Kardashians—and frankly, after appearing in a mammoth 17 seasons, it's hard to blame her if she's had enough. In a September interview on The Real, she said her feelings about the show vary: "Every day is different," she said, as Hollywood Life reported. "But at the current moment I’m happy and very into my blessings and feeling very good. But I definitely have my moments where [I want to leave]. Because I mean, life is short, and you want to be happy."

In fact, Kourtney discussed the show wrapping up back in 2016: "I don't want the show to end, but I sometimes think I would be so happy if it did, and I could just move away from it all," she said. "By the end of every season I've had enough, but then once we have had a break I'm ready for more." Kourtney, in the immortal words of Fergie, I would miss you like a child misses their blanket—but you should absolutely do what's best for you. 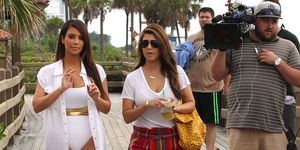